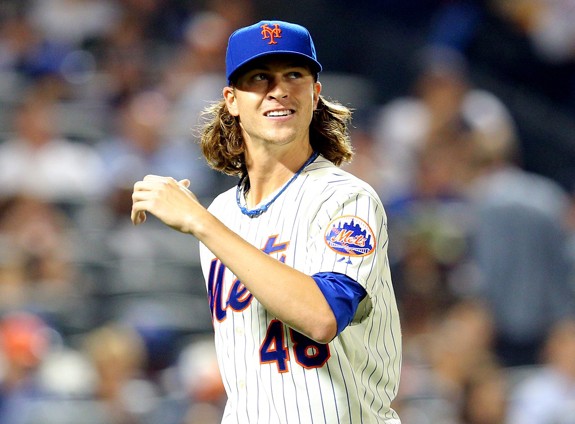 Tracking the outcome of games played by the New York Mets is a dizzying task. They have put together four separate win streaks of three games or more, mingled with five losing streaks of the same amount. The Mets have won four games in walkoff fashion. They have lost five the same way. They are floating around .500, still in fighting distance of the playoffs, but not yet showing themselves to be good enough to go on an extended run. At least things have been exciting in New York.

Mets batter of the month: Dan Murphy – The bottom of the order has been so bad for the team that the Mets’ offense has been dragging, even though David Wright and Curtis Granderson have finally started to heat up. Wright is pacing the squad in RBI, while Granderson is tied for the team lead in extra-base hits. However, neither had the impact with the bat the Dan Murphy did in May. Murphy is third among National League second basemen in batting after a month in which he hit .293 with a .376 on-base percentage and a .455 slugging percentage. Also, for anyone who still remembers the controversy over Murphy missing the first two games of the year to be with his wife and newborn child, Murphy has only missed two innings since then.

Mets pitcher of the month: Jeurys Familia – One of the reasons the Mets have not taken off is that their pitching, which was expected to carry the team, has been mediocre-to-bad and stricken by injuries. It has looked better in the past two weeks, but no Met pitcher has looked as sharp as Jeurys Familia. The young right handed reliever earned his second career save last week, and may be in line for more. In the month of May he pitched an astounding 18 games with an ERA below 2.00. Despite blowing a save on the last day of the month, Familia completed May with more than a strikeout per inning and only four earned runs allowed.

Disappointment of the month: Chris Young – While missing time in April on the disabled list, Young offered the Mets some hope that he could return and provide some offensive firepower. Instead, Young has continued a downward trend in which his OPS has plummeted for the fourth consecutive season. In May he had as many strikeouts as hits, batting only.198. Young has looked bad enough to warrant questions about whether he should even be on the roster right now, although one would be hard pressed to find a viable replacement outfielder in the minors.

Pleasant surprise of the month: Jacob deGrom – Jacob deGrom made his first career start on May 15th, nearly out-dueling Masahiro Tanaka in a  great primetime game. Since then, deGrom has had three more games, all of them quality starts. His 0-2 record does not reflect the results he has gotten, as he has put together a 2.42 ERA over 26 innings. When Mets fans wanted a rookie recalled to the majors, Noah Syndergaard was the one they were clamoring for, but deGrom has surely won people over with his play. He was no doubt the best starting pitcher on the team in May, but it would be unwise to expect that to continue for long. DeGrom’s peripheral statistics all look a bit iffy, and considering he is even outperforming his minor league ERA from this year it is probably safe to assume deGrom’s orbit will be circling closer to Earth as the season wears on.

The next month is big for the Mets. They need to hang tight, and some roster additions could help them compete. Syndergaard seems to have come away from his elbow injury free and clear, and could bring a much needed boost to the rotation. In spite New York’s troubles, no one the NL East has been able to runaway, so the Mets remains only four games out of first place and only two games out of the wild card.