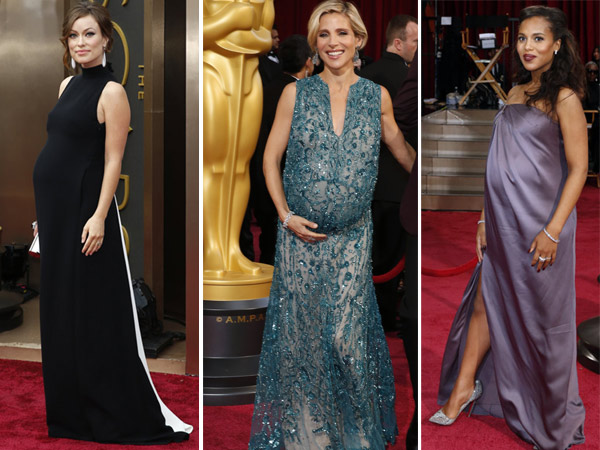 Many pregnant celebrities have been giving birth while other starlets have been joining the moms-to-be club, so a star baby boom update is in order. The unique baby names that some star parents have chosen are also a potential topic of conversation.

Among those who welcomed a baby in April are The Hangover’s Justin Bartha, and his wife Lia Smith. Their daughter Asa Charlotte arrived on Sunday, April 13 and the secretive new mom and dad managed to keep the birth of their baby girl under wraps for over a week.

On April 20, Olivia Wilde gave birth to her son with Jason Sudeikis, Otis Alexander. Drew Barrymore was next in line to give birth. She delivered daughter Frankie, her second child with husband Will Kopelman, on April 22. Kerry Washington also welcomed her daughter Isabelle Amarachi in April. On the twenty-fourth, she and husband Nnamdi Asomugha became first time parents. David Arquette, 42, and girlfriend Christina McLarty welcomed their new baby boy, Charlie West, on April 28. He was born in Los Angeles and weighed 8 lbs 7 oz. He joins big sister Coco, Arquette’s nine-year-old daughter with actress Courtney Cox.

The May celebrity babies began with the birth of Kristin Cavallari’s baby boy Jaxon Wyatt on May 7, weighing in at 7 lbs 11 oz. The proud mother of two announced the happy news via Twitter. Kendra Wilkinson-Baskett, 28, delivered a healthy baby girl on May 16 in Los Angeles. She and husband Hank named their new bundle of joy Alijah Mary. She joins big brother, four-year-old Hank IV. A few days later on May 19, Ciara gave birth to a hefty baby boy weighing 9 lbs 10 oz, named Future Zahir. Baby Future is Ciara’s first child with rapper/producer fiance Future.

Jenna Fischer, 40, and husband Lee Kirk welcomed baby number two, daughter Harper Marie, on May 25. Ginnifer Goodwin and husband Josh Dallas became parents on May 29 with the birth of their son Oliver Finlay. Mick Jagger became a first time grandfather at the end of May with the birth of granddaughter Assisi Jackson’s first child. Jackson and boyfriend Alex Key welcomed a baby girl, their first child together.

The star baby boom continues into the middle of the year with the latest update on pregnant celebrities who gave birth in June. Lil Kim gave birth to her daughter Royal Reign, on June 9. Royal’s father is reportedly the New York-based rapper Mr. Papers. On June 12, Kelly Clarkson and Brandon Blackstock welcomed their baby girl, River Rose. Clarkson shared the news on Twitter, adding “Brandon and I are on cloud nine!”

In mid-June Mick Jagger became a grandfather for the fifth time when his daughter Jade Jagger, 42, gave birth to her third child, a baby boy. She already has two daughters Assisi, 21, who gave birth just a few weeks earlier, and Amba, 17.

Not only have pregnant celebrities been welcoming babies into the world, but other excited stars are happily announcing the news of their pregnancies. Lake Bell, 35, debuted her baby bump in April at the Tribeca Film Festival with husband Scott Campbell. Leelee Sobieski, 30, announced at Christian Dior’s “Cruise 2015” event, that she is expecting her second child with husband Adam Kimmel. The couple has a four-year-old daughter, Louisianna Ray. Lindsay Price, 37, and Curtis Stone, 38, also announced their baby news in May, on The Queen Latifah Show. The couple is adding to their family of three. They have a two-year-old son, Hudson.

Kourtney Kardashian is expecting her third child with husband Scott Disick. The couple has two children Mason Dash, four, and Penelope Scotland, 23 months. Mad Men’s Kevin Rahm and his wife Amy Rahm are expecting their first child, a little girl, in September. Evanescence frontwoman Amy Lee is pregnant with her first child with husband Josh Hartzler. Rachel Bilson, 32, and fiance Hayden Christensen, 33 are expecting their first child together. The big news was revealed after Bilson showed off her pregnant belly in a bikini during the couple’s recent vacation to Barbados.

Kelly Rowland, 33, posted a picture of baby sneakers to her Instagram page on June 10. A picture of a yoga pose exposing her pregnant belly confirmed that Rowland was expecting. The baby will be a first born for her and husband Tim Witherspoon.

There is a mini baby boom going down in the country music arena. Rascal Flatts guitarist Joe Don Rooney, 38, and his wife Tiffany Fallon are expanding their family. She is pregnant with their third child. They have a son Jagger, five, and Raquel Blue, whom they call “Rocky,” was born in 2010. Lady Antebellum singer and guitarist Dave Haywood and wife Kelli are expecting their first child, a baby boy, in September. Country singer Holly Williams announced on Mother’s Day that she and husband Chris Coleman are expecting their first child. To round out the mini baby boom, is country singer Josh Turner and his wife Jennifer. They are preparing to welcome their fourth son in September. They already have three sons, Hampton, seven, Colby, five, and three-year-old Marion.

Some pregnant celebrities took the time to announce the genders of their buns-in-the-ovens. On May 8, Snooki, 26, announced the gender of her coming baby by posting a short video to her blog, which revealed that she and husband Jionni are having a baby girl. The new addition will j her big brother two-year-old to the family. Then on May 15, Alyssa Milano posted a short video to her website, revealing that her and husband David Bugliari are expecting a baby girl. The two already have a son together, 2-year-old Milo Thomas.

The proud pregnant celebrities keep the hospitals booming with their star babies, and some make it a point to keep fans updated as it happens. As fans keep waiting, watching, and listening, the stars will keep entertaining and intriguing with their private lives and the most precious and important moments from them.