‘Shakespeare: The Stuff of the World’ on Exhibit in Moulins

The Centre National du Costume de Scène in Moulins (CNCS) presents Shakespeare: The Stuff of the World until January 4, 2015. For the 450th anniversary of the birth of Shakespeare, the Moulins museum takes visitors into Bard’s world, with the most emblematic costumes to arrive on the French theater stage. From the replication of an Elizabethan theater to costumes for Hamlet, more than 100 costumes are on view at the CNCS. The costume exhibit takes visitors through the playwright’s most well-known plays from the days of Jean Mounet-Sully to present-day.

To fully appreciate the Shakespearean world, the museum highlights 12 rooms with the “realities, beliefs and dreams” of daily Shakespearean life in French productions. Through the accessibility and display of costumes, all of the characters – kings and queens, buffoons, soldiers, young girls, and, of course, witches and spirits – share their accounts and timeless stories of treachery and love, freedom and might, sorrows and quests, triumphs and failures with viewers.

The Elizabethan era was dominated by the class structure. The Sumptuary Laws aimed to curtail the sumptuousness of dress, in the interest of restricting extravagance and making transparent the necessary distinctions between the classes in Elizabethan society. One matter of concern was that by allowing an individual to wear whatever he chose, would lead inexorably to moral decline. The same held true with plays. Costumes of kings and queens or the affluent reflected their character’s social status down to the color of the thread. Therefore, the audience immediately discerned from the actor’s costume colors and fabric, the character’s role and status, even to the point of stereotype.

At the CNCS, the experience begins with a replicated Elizabethan theater. Similar to the original Shakespeare’s Globe in London, it is a reconstruction with the circular wooden theater featuring stages that project into the audience. In this sedate and emblematic setting, richly-decorated costumes from the Richard III production created by Jenny Tiramani are on view.

Bard’s world is also explored through production with a replicated theater costume workshop. From conception to the realization and use of stage costumes, it examines the process of communication between the stage directors and costume designers. It further surveys the fabrics, cutting techniques, assembly and embroidery, with notations written directly onto the cloth. It also displays the production photographs and portraits that encapsulate the actors in their roles.  If not donated by a wealthy patron, the stage company’s costumes were some of their most valued assets, at times costing more than the purchase of the play itself. 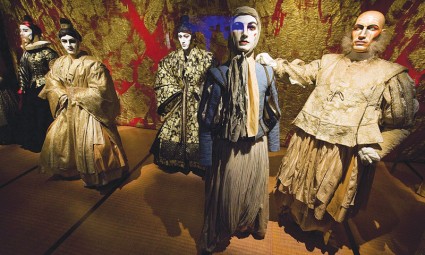 In Shakespeare’s plays, princes often mixed with beggars and fools, and fortune’s could swiftly turn a king into a vagrant. Stage directors and costume designers had liberty with the diversity representing the playwright’s tragedies and comedies. At times, two costumes were fabricated for the same character, further illustrating the designer’s freedom, through different renditions as seen in the costume of Mistress Quickly, one of the Merry Wives of Windsor.

In the playwright’s comedies, young girls were frequently disguised as boys, to preserve their virtue while simultaneously, playing with their identity. Costuming became more complex when considering that cross-dressing was implicit in the Elizabethan theater era because only men were permitted to appear on stage.

Magic, enchantment and the supernatural played a part in the Shakespearean theater, and with it came excessiveness, extravagance and fantasy. Among the most dramatic examples on display is the Lady Macbeth’s gold-colored dress, designed by French designer, Thierry Mugler. It featured exaggerated proportions with an immense box-like hooped skirt. Prospero’s coat required “extraordinary cutting” while the witches were garbed to “erase the frontiers between man and animal, feminine and masculine,” which made the audience believe in their power.

The Moulins show unveils the incredible labor and foresight that went into costuming Shakespearean actors. With the laws that governed Elizabethan society, the Shakespeare: Stuff of the World exhibition transports visitors on a visual and historical experience to regard the most representational Shakespearean plays over the last century.