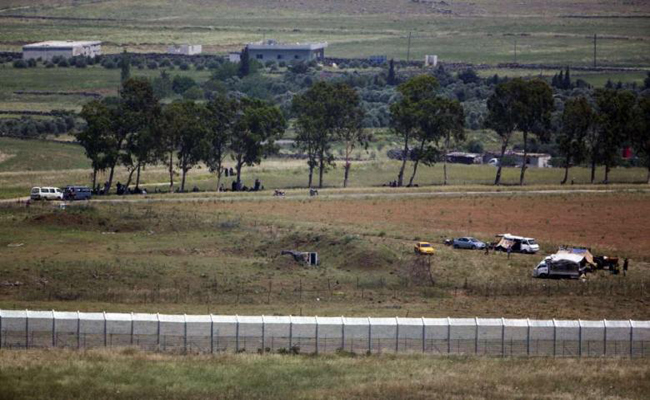 Syria was hit by Israeli airstrikes and tank rounds today. The attacks come in retaliation for a rocket attack earlier in the day that destroyed an Israeli vehicle in the Golan Heights on the Syrian border that killed a young boy and injured his father. The Israeli action is the first serious cross border attack by the Israeli armed forces in the occupied Golan Heights since the civil war in Syria began almost four years ago.

A spokesman for the Israeli army said that the Syrian rocket attack that killed the boy was intentional. The rocket came straight at the vehicle as it was driving along the border fence line and destroyed it. Israeli tanks immediately opened fire on Syrian positions along the border. Soon after, the Israeli airforce struck several Syrian government targets deeper in Syria.

Hezbollah and Syrian rebels have been fighting in southern Syria near the Israeli border for over a year. Recently, Hezbollah-backed fighters loyal to the Syrian government captured the Lebanese village of Tfail and forced the surrender of 70 Syrian rebels. Israeli military commanders have been nervously watching the fighting in Syria get closer to the Israeli border. Both sides of the Syrian conflict, the Syrian government forces backed by Iran and Hezbollah and the Syrian rebels infused with al-Qaeda extremists, are considered enemies. The latest incident confirms Israeli fears that the Syrian civil war has come at last to their country.

The 45 mile fence line in the Golan Heights is one of Israel’s new defenses along the Syrian border aimed at preventing militants, gun smugglers and illegal immigrants from crossing into Israel. The existence of the recently built fences and other barricades along Israel’s borders have contributed to the sharp decrease in suicide bombers originating from Gaza, Syria and Lebanon. The double fence line perimeter is patrolled and checkpoints dot the border. In between is a no-man’s land, swept by the sites of remotely controlled machine guns. The fence line was not intended to stop the kind of attack that occurred today.

Israeli military commanders hope the Israeli airstrikes that hit Syria serve as sufficient warning to the Syrian government to restrain from further provocation. Israeli armed forces have patrolled the Golan Heights since Israel captured the area from Syria in 1967.

Israelis have come to accept the siege mentality that has arisen as a result of the fences and barricades that encircle their country. In 1994, Israel constructed a separation barrier along the border with the Gaza Strip. An additional and controversial barrier was constructed in 2005 to separate the Gaza Strip from Egypt, thus sealing off Gaza residents. Construction is still continuing on the controversial West Bank barrier which separates the Israeli and Palestinian sides of the West Bank. Palestinians have long demanded the removal of the barrier since they believe the Israeli part of the West Bank belongs to the future Palestinian state. Israel’s strategy of fence building arose from the repeated attacks by Palestinian suicide bombers in Israel.

The latest incident brings more attention to the conflict raging in southern Syria as Israel contemplates further action to strengthen its position along the Syrian border. If cross border incidents escalate, Israeli airstrikes will likely continue to hit Syria and draw Israel deeper into the conflict.