The History of Fireworks 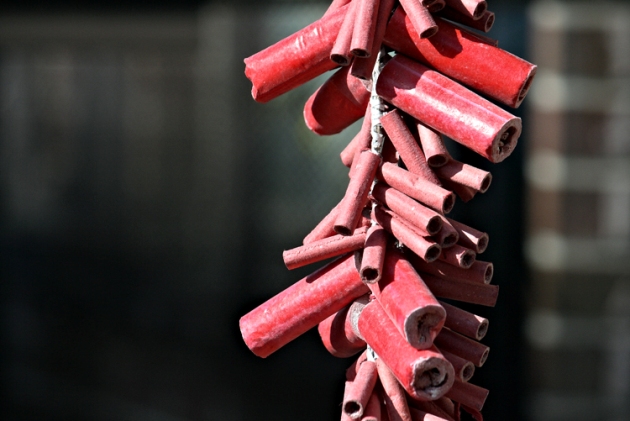 Long before gunpowder was first discovered, there were fireworks. Thousands of years ago in China, most likely during the Han dynasty, it is believed that green bamboo was thrown onto a fire which was in short supply of dry fuel. Because bamboo grows incredibly fast, it allows both sap and air to get trapped inside its segments. When green bamboo is heated, any trapped air inside expands and eventually bursts with an explosive noise. After the bamboo that was thrown on the fire had surely scared both animals and people, the Chinese surmised that the noise would also frighten away evil spirits, particularly one named Nian. It quickly became customary to throw green bamboo on the fire during the Lunar New Year in order to scare away Nian and other spirits and to promote a prosperous and happy year. Eventually, the bamboo, with its explosions and noises, was being used to celebrate other special occasions such as births and weddings. The Chinese people called these noisemakers “pao chuk” and used them for another thousand years.

When gunpowder was accidentally discovered by alchemists in China during the Sui and Tang dynasties, it was not the same type of gunpowder that is known today. While it produced a hot, bright flame, it did not contain as much potassium nitrate as true gunpowder. It did, however, burn more powerfully than regular fire and was soon placed inside bamboo tubes to create a louder and more explosive bang than had been achieved with empty bamboo. Thus, fireworks were invented.

Over time, experiments revealed that adding more saltpeter to the gunpowder mixture would allow it to burn faster which, in turn, created a louder and more powerful explosion. Additionally, logs and iron shells were used as well as bamboo. The Chinese began more experiments with both gunpowder mixtures and different types and configurations of containers in order to create eruptions of smoke, sparks and flames. In the 10th century, they began to utilize their knowledge in order to create loud bombs, which were used in warfare to confuse and frighten the enemy. Eventually, the emphasis was no longer on simply scaring the enemy, but to actually harm them. To this end, pieces of pottery, rock and metal were added to the bombs which would be ejected during detonation and cause damage. In the 11th century, the gunpowder mixture was changed to raise the saltpeter level to about 75 percent with the remainder made up of sulfur and charcoal. The same formula created at that time, 1,000 years ago, is still the same formula for gunpowder that is used today.

Because the gunpowder became more powerful, firecrackers had to change, which led to the invention of a firecracker known as a ground rat. The ground rat was a light, open-ended firecracker that would shoot out burning gases, propelling the firecracker around the ground in random patterns. This also was adapted for warfare and eventually, during the 13th century, designers learned to put fins on the sides of these explosives to straighten and guide their flight paths, allowing the explosives to become airborne. The addition of these guidance fins led to the invention of the first ever military rockets. In turn, these military rockets were adapted by fireworks makers and pyrotechnic engineers to become the dazzling spectacles that are modern fireworks shows.