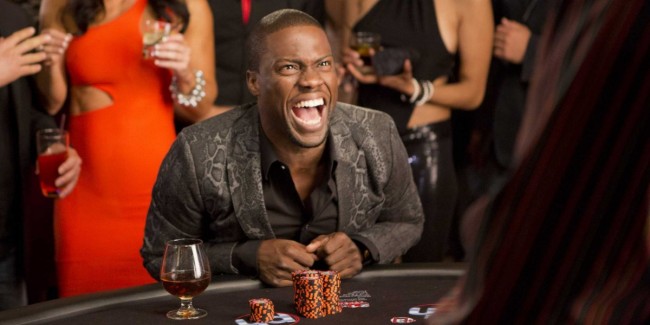 Comedian Kevin Hart, who some call the funniest man in America, helped make Think Like a Man Too the new number one movie this weekend at the box office, earning $30 million for Sony. It is the second Sony film in a row to take the number one spot, the first being 22 Jump Street, which debuted last weekend. 22 Jump Street, starring Jonah Hill and Channing Tatum, narrowly fell to second place this weekend, earning $29 million gross.

Still, Think Like a Man Too did very well for itself, already earning back the $24 million it cost to produce the flick. The PG-13 movie also features, as did the original, Regina Hall, Michael Ealy, Megan Good, and Jerry Ferrara. The movie drew inspiration from Act Like A Lady, Think Like A Man, a best-selling book written by Steve Harvey.

For anyone who has not yet seen Think Like a Man Too, its plot is about some couples who travel to a wedding in Las Vegas. However, their plans go incredibly wrong, often in humorous ways. Though some viewers did not like the sequel as much as the original, the movie performed solidly enough to top this weekend’s box office ticket sales.

In 22 Jump Street, the sequel to 21 Jump Street, actor Channing Tatum and comedian Jonah Hill portray cops Jenko and Schmidt who go undercover in search of a drug czar who is pushing his wares on a college campus. According to Rentrak, the movie has earned a total of $111.5 million both domestically and globally so far.

Although the Clint Eastwood-directed movie, Jersey Boys (Warner Brothers), about Frankie Valli and the Four Seasons, was also in the Top 5 at the box office in its debut in fourth place, it earned less than half the gross that Think Like a Man Too did. Adapted from the Broadway smash of the same name, it just took in $13.5 million. That is still better than the $12 million it was projected to earn its debut weekend.

People who attended Jersey Boys, featuring veteran actor features Christopher Walken, were older than those who attended the top two movies, Think Like a Man Too and 22 Jump Street, with 71 percent of them being older than 50, according to The Hollywood Reporter site.

Another sequel, the animated movie How To Train Your Dragon 2 (Dreamworks), was in third place, earning only $25.3 million its second weekend out the gate. The amount of money it earned dropped 49 percent from its opening weekend. The plot of the movie is about two friends who discover a cave full of hundreds of dragons, and they are at the center of a battle to keep the peace.

How To Train Your Dragon 2 has done well in some foreign markets, earning over $6 million in Brazil this weekend, making it the highest-earning animated movie its opening weekend ever in that country. It has so far taken in an impressive $77.2 at the foreign box office, which makes the movie’s overall world total earnings $172.4 million.

Malificent, featuring Angelina Jolie in the title role, took the fifth place at the weekend box office. It raked in $13 million, bringing its domestic total take to $186 million, while globally, the movie broke over the $500 million mark. It was Jolie’s first live-action film she has starred in that has achieved this distinction. The movie’s total take through Sunday is $521.6 million.

Compared to this same weekend last year, the total box office take was disappointing, falling 39 percent, according to Rentrak. However, domestic sales in total are up by a small margin, 0.6 percent, compared to the same time a year ago.

The other movies rounding out the Top 10 were Edge of Tomorrow (Warner Bros.) at number 6, earning $10.3 million; The Fault in Our Stars (Fox), coming in at number seven, with a take of $8.6 million; X-Men: Days of Future Past in eighth place, garnishing $6.2 million, for an overall box office take of $216.8 million; Chef Open Road Films), at number nine, earning only $1.85 million; and, in the tenth spot, Godzilla (Warner Bros./Legendary) took in $1.82 million, to bring its world total so far to $194.9 million.

Think Like a Man Too is expected to continue doing well throughout the week, though in a summer in which every weekend another movie takes over the top box office spot, it might not be able to hold the number one position over next weekend. Kudos to comedian Kevin Hart, as he is once again proving to be box office gold for Sony.