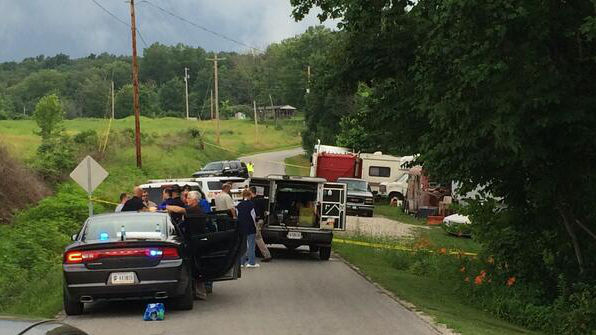 One of three Indiana men who are faced with alleged murder and also other charges in the deadly shootings of two Paoli males and the wounding of another explained to a police detective that he and the other two had gone to the scene of the crimes in order to purchase methamphetamine, stated court documents which were filed on Thursday afternoon.

Elbert Edward Brooks, age 48, of New Albany, Indiana was arrested late Wednesday. He told Indiana State Police that he went with the two other suspects to the rural mobile home of Nicholas Fields, age 56, of Paoli, Indiana and he believed they were going to get methamphetamine, according to a probable cause document that was presented in the Orange County Circuit Court.

Brooks stated he remained outside in an automobile when he heard a round of gunshots and James L. Davidson, age 36, and John Carpenter, age 35, each of Marengo, hurriedly returned to the vehicle. They both supposedly told Brooks that something had went wrong, according to the affidavit. Brooks explained that the three then returned to the town of Marengo, Indiana where he was given methamphetamine and money.

He is being held on a $1 million bond while Indiana police continue to look for both Carpenter and Davidson. Court records show at the present time that Brooks does not have an attorney. All three men are facing two counts of murder, one charge of attempted murder and one count of robbery. Davidson and Carpenter also face charges of being habitual criminals and they each are considered armed and dangerous. Indiana State police Sergeant Philip Hensley stated that police detectives do not think the two criminals are together at the moment. Witnesses say that Carpenter was last spotted driving a pickup truck.

Nicholas Fields died Monday while a second shooting victim, Corey Michael Harris, age 25, passed away on Tuesday at a hospital in Louisville, Kentucky. A third man, Daniel Smitson, age 29, was recovering from a gunshot wound in the mouth. Each victim was from Paoli, Indiana, which is about 45 miles to the northwest of Louisville.

Smitson told ISP that after showing up at Fields’ home, Carpenter allegedly ordered him and Fields to both get down on the floor. He then proceeded to shoot each of them in the head. Smitson then supposedly stated that Harris was shot while attempting to crawl toward a street. Court documents read that guns were also removed from Fields’ house and later tossed into a river.

Indiana State Police refused to talk about any motives for the shootings but did add that they believed the incident was targeted; it was not a random act.

On Friday, ISP detectives also announced they were looking for Annette D. Davidson, age 54. She is the wife of murder suspect James Davidson and she has been charged for allegedly assisting her husband in hiding from the police. She is wanted for questioning

Indiana State Police is asking for help from anyone who might see Mrs. Davidson to immediately contact them at 812-482-1441. They are requesting that no one actually confront the woman but to get in touch with them ASAP.

They also continue to look for both murder suspects Davidson and Carpenter. The two men are wanted for the alleged shooting and killing of Fields and Harris and the wounding of Smitson. The third suspect, Brooks, has been caught and is behind bars.