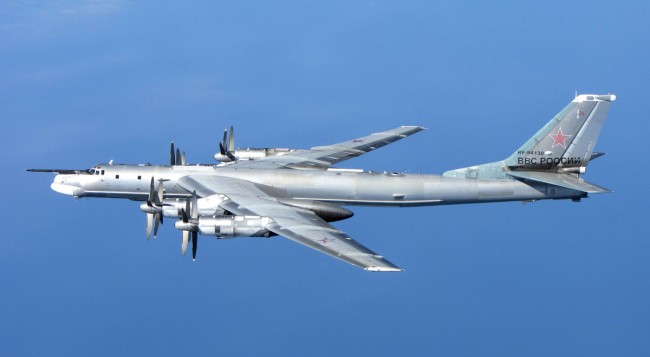 Four nuclear capable Russian bomber planes and an aerial fuel tanker were recently intercepted by U.S. F-22 fighter jets. The U.S. jets were from Joint Base Elmendorf-Richardson in Alaska and they were scrambled after radar detected the Russian planes near the Aleutian Islands. Two of the Russian bombers later entered the U.S. Air Defense Identification Zone (ADIZ) off the California Coast.

The defense zone extends 200 nautical miles off the coastline and surrounds most of the United States and Canada. In the interests of national security, all aircraft entering the ADIZ must submit identification credentials and the zone is monitored by military in both countries as well as civilian air traffic control. By some reports, the Russian pilots had not filed a flight plan thus the U.S. jets were scrambled to get further information.

The four Russian planes were long-range nuclear capable Tu-95 Bear-H bombers and when they were initially intercepted by the U.S. fighter jets the Russian pilots split their trajectory. Two flew in the direction of Far East Russian and the other two diverted their course towards the west coast of the United States, eventually flying into airspace just 50 miles off the California coast. This set off U.S. defense systems for a second time and at that point, two U.S F-15 fighter jets from Oregon were scrambled to get a visual identification of the bombers.

According to Captain Jennifer Stadnyk of North American Aerospace Defense Command (NORAD) the mission of the flights appeared to be for training purposes. Further, Major Beth Smith, also of NORAD has stated that Russian aircraft have flown into the ADIZ “dozens of times” over the last few years. However, NORAD spokesman Captain Jeff Davis says that the current incident was the first time Russian military aircraft has been intercepted off the coast of California since July, 4 2012 and also that it was a very “professional encounter” between all parties involved. Further, Davis stated that no protocols to international law were violated, as the Russian bombers never entered U.S. territory, which extends 13.8 miles out from the U.S. coast.

According to U.S. General Herbert “Hawk” Carlisle, Russia has “stepped up military activity in the Pacific” and he relates it to the current activities in the Ukraine and Crimea. Recently, General Carlisle spoke to the Center for Strategic and International Studies in Washington and shared his perspective on the issue of why both military air and nautical activity by the Russians has increased in not just North America but also in Japan and Korea. According to the general, President Putin is demonstrating that he has the “capability to do it” and that Putin is gathering “intel” from “U.S. military exercises with allies in the region.”

Just last April, a Russian fighter jet pulled a stunt right out of the movie Top Gun and flew dangerously close to a U.S. military reconnaissance plane. According to a Defense Department official, the provocative maneuver presented a real and present danger to the U.S. pilots and put the “lives of the U.S. crew in jeopardy.”

Congressman Mike Conaway (R) from Texas is a member of the House Armed Services Committee and he takes General Carlisle’s perspective even further. Conaway states that the Russian bomber flights are “intentional provocations by President Putin.” He also scoffed that had there been any real issue the U.S. could have “squashed” either one of the Tu-95 Bear-H bombers “like baby seals.”

Congressman Conaway has further stated that President Putin is trying to “taunt the U.S.’ in the form of “saber-rattling, muscle-flexing nonsense.” In response to such provocation, the U.S fighter jets quickly scrambled to intercept the nuclear capable Russian bomber planes both in Alaska and off the coast of California, even if only for surveillance rather than any “squashing.” Clearly, the defense systems in the ADIZ are actively on the alert. However, whether Putin is saber-rattling or not, it is clear that the U.S. military perspective is that the potential for a “real” encounter is not out of the realm of possibility.