US Open Championship Another Disappointment for Phil Mickelson: Golf Shots 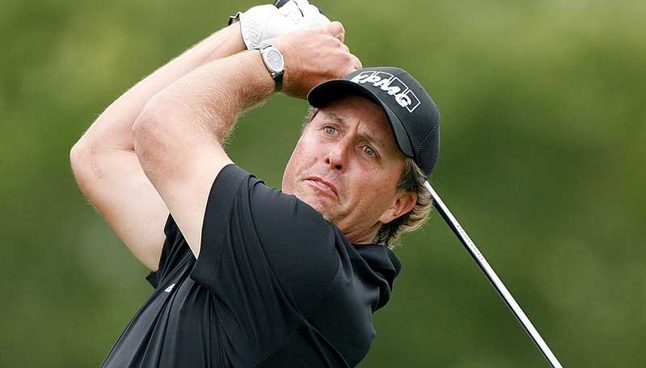 Another US Open Championship has turned into another disappointment for Phil Mickelson. Amid all the hype and the hope in 2014, the truth is, Lefty was not playing well enough to win the one major which would complete his personal grand slam.

The reason for so much optimism this year was the re-tooled Pinehurst No.2 golf course seemed to set up perfectly for Mickelson’s game. In any other year, a US Open course characteristically features narrow fairways with deep thick roughs, severely penalizing players for straying from driving areas, with the grass gradually longer the farther your ball strayed from the fairway. Pinehurst was a departure from the norm, with wide fairways and no rough—only native areas dotted with wire grasses amidst the natural soil of the North Carolina Sandhills region. The ground crew used only two heights for their mowers—one for fairways, one for greens.

Phil Mickelson’s rosy outlook grew out of the fact that he had been hitting his driver straighter than ever, and would be hitting the wide fairways with regularity. On a golf course which placed an emphasis on iron play and the short game—two of Mickelson’s strengths—it seemed there would never be a better time for him to chalk up his first US Open Championship. The only question which would need to be answered concerned Phil’s putting, and his plan was to switch to a “claw” grip, which gave him a smoother pass through the ball and therefore lessened the chances of his putts going four and five feet past the hole.

Something happened, however, on the way to the winner’s podium. Despite the wide, forgiving fairways, Mickelson hit only 57 percent of them. Even though the native areas often afforded the players a decent lie, nothing compares to hitting from the fairway when your target is slick, concave greens. His putting never came around either—a deadly combination for a player trying to compete in, and win, a US Open Championship. “I thought I had a great game plan, I was ready to play, and sometimes it just doesn’t click,” said Mickelson, “you’ve got to execute. You’ve got to hit some golf shots, you’ve got to make some putts.” He mostly blamed too many blown opportunities during his first two rounds.

Mickelson, who turned 44 years old on Monday, has finished runner-up six times at the US Open Championship, and if anything good can be said for his try in the 114th version of our national championship, it could be that at least he did not feel the heartbreak of coming so close again. His finishing score of 7-over par 287 placed him in a tie for 28th, but Mickelson has not lost his optimism about winning this major in the next few years. “I believe in the next five years I’m going to have three or four really good chances, and I do believe I’ll get it,” said Phil, adding that he is not necessarily disappointed, “I will have more chances, and right now, given the way I have been playing coming in to this tournament, it was really a long shot,” the five-time major winner admitted. He also added that he has some work to do in order to make more major wins a reality, “I’ve got to get some momentum and get my game sharp for me to really have a chance at winning.”

If going the entire year without a top-ten finish has not been enough, his performance in the 2014 US Open Championship has underscored Mickelson’s realization that he needs to get his game back to where he wants it, “I’m going to spend the next five to six weeks seeing if I can get it going here to finish the season strong.” If he is true to his words, those five to six weeks will include defending two championships in the British Isles. He will play in the Scottish Open beginning July 10, and then the Open Championship at Hoylake on July 17.