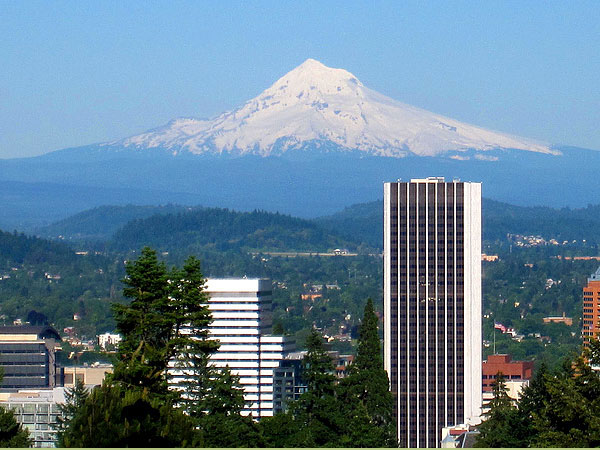 Looming over the Portland, Oregon horizon, the silence and sheer mass of the Mount Hood volcano implies a threat to the city if only by its mere presence. Part of the Cascade Volcanic Arc – from California’s Mount Shasta up into British Columbia – Mount Hood is one of a dozen such volcanoes that have blown at one time or another in the last 10,000 years. This means they are all potentially active. This article examines possible threats to Portland should Mount Hood erupt.

All seems right with the world in this place where rivers converge. Water, sky and verdant foliage paint the visual palette in dazzling blues and greens. The City of Roses is currently ranked by Sperling’s Best Places as tops for foodies, safest for families with young children and even most playful. Portland has also been labeled as a City on the Edge of Greatness.

With a great volcano looming over Portland’s skyline, the question is begged as to whether the city itself is threatened by the mountain. Scientists express no doubt that it will erupt again. The open question is not whether, but when and to what extent.

The mountain itself is 500,000 years young. It has experienced centuries of frequent eruptions, interchanged with quiet periods lasting more than 10,000 years. Mount Hood most recently has had two significant periods of eruptions, about 1,500 years ago and 220 years ago. The last major eruption was right before Lewis and Clark’s odyssey to the Pacific Northwest in the 1790’s.

As the crow flies, Mount Hood is only about 40 miles south and east of Mount St. Helens. However, unlike Mount St. Helens, Mount Hood has had few violent or explosive eruptions in its history. Geologic records of the mountain indicate lava flows generally travel only six to eight miles. This layering has built up the sides of the volcano one area at a time.

Volcanologists state that, although communities east of Portland would be in for the worst of any physical devastation, Portland itself would not be directly affected by lava flows, pyroclastic flows, or lahars (fast-moving mudflows). The city would likely see small amounts of ash falling from the sky, similar to what it experienced from the eruptions of Mount St. Helens in 1980. However, the U.S. Geological Survey (USGS) said in a report that any eruptions in the future may cause serious disruption to water supplies, transportation (highway, river, and air), and the hydroelectric power system in the region.

The USGS report states that the most likely widespread and hazardous consequence of a future eruption will come from lahars that sweep through the Sandy and White River valleys. “Structures close to river channels are at greatest risk of being destroyed,” the report says.

A recent study from Oregon State University indicates that any potential eruption of Mount Hood could provide up to two months of warning of a likely non-explosive eruption. The mountain is currently holding its magma in “cold storage” but the time it takes for this solid magma to liquefy and possibly erupt would a couple months. The volcano known as Mount Hood does indeed threaten Portland with significant transportation, water and power disruptions, but devastation is not likely.