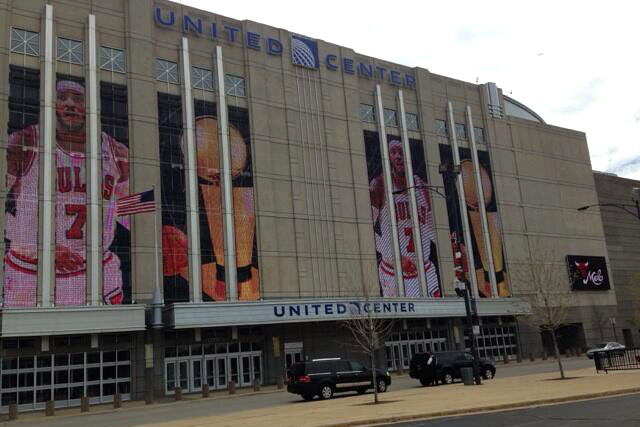 Carmelo Anthony officially announced he would become a free agent last month. He began his free agency tour in Chicago on Tuesday. Carmelo is still looking to travel to Houston, Dallas and Los Angeles to determine which jersey he will be wearing in this upcoming season. On Tuesday though, the Chicago Bulls franchise welcomed Carmelo Anthony on the first day of the NBA Free Agency in ways that exceeded his expectations.

Carmelo Anthony arrived at Chicago’s United Center to surprisingly see his name in flashing lights. The United Center had both their jumbo welcome signs project a picture of Carmelo in a Chicago Bulls jersey with his number “7.” This also included an image of the star with championship Larry O’Brien trophy massively on the walls of the United Center. Signs with “Carmelo Anthony,” “Chicago Basketball,” and “Melo,” were also stacked on top of one another in black and red all along the sides of the facility.

Melo pulled up to the front of the arena in a limo bus with Chicago Bulls head coach Tom Thibodeau and two other executives for the Bulls. A Chicago Police car led the vehicle to the United Center where fans and press were already awaiting Melo’s arrival. The fans lined up along the famous statue of Michael Jordan, also known as The Spirit, hoping this would be a convincing aspect for Melo to realize just how far his talents could take him should he decide to sign with the Chicago Bulls.

Chicago wants Melo. The Chicago Bulls have exceeded many expectations of Chicagoans and Bulls fans all over the country. They never could finish the job to bring an NBA title back to the same arena where Michael Jordan and Scottie Pippen brought two three-peat NBA titles back home to Chicago in the 1990s. Coach Tom Thibodeau and many other members of the franchise are looking to do anything to bring Melo to Chicago hoping this is what it is going to take to ensure a winning season.

Carmelo Anthony, a small forward from the New York Knicks, was welcomed in Chicago on the first day of being a free agent. Melo toured the soon-to-open practice facility right across the street from the United Center and was impressed by its modern design. Alongside with Coach Thibs was some of the Bulls go-to stars, Derrick Rose, Taj Gibson and Joakim Noah, who was awarded Defensive Player of the Year.

Melo respects many of the Bulls player and the franchise as a whole. There have been rumors of trading Jimmy Butler and Taj Gibson. He pointed out though that if he were to sign with Chicago, he wants both players to play alongside with him. This could lead to a significant pay cut, but he stated he would be willing to make that sacrifice. Melo’s contract could land him $129 million for five years. Signing with the Bulls would also mean that Melo could still stay in the Eastern Conference, which is less competitive than the Western Conference.

Carmelo Anthony will travel to Texas to meet with both the Dallas Mavericks and the Houston Rockets. He will also be meeting with the Los Angeles Lakers this week. Melo started off his tour in Chicago on Tuesday and was welcomed by the whole Chicago Bulls franchise on the first day of the free agency. Coach Tim Thibodeau and the Chicago Bulls made sure to leave Melo with all the right impressions to show that Chicago is the next stop in his career.