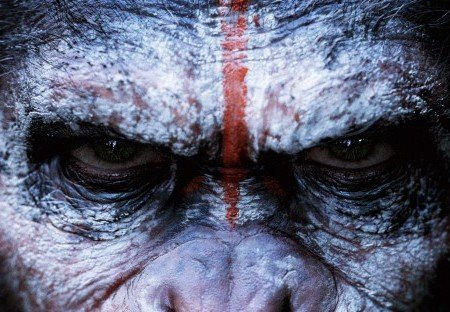 20th Century Fox and Chernin Entertainment have come up with a serious sequel in Dawn of the Planet of the Apes. Even if the title is still as wordy as the first in this apparent franchise. There are still two sets of “of the” in the title but that does not matter in the least. The film delivers a dose of perfection that can hardly be matched by any other CGI heavy film in cinemas this year.

Once again Andy Serkis dons his motion capture suit to portray Caesar and in this sequel another Brit actor also steps into the art of “performance capture,” Toby Kebbell plays Koba the “ape with attitude” from the first film. Kebbell (Dead Man’s Shoes, Prince of Persia: Sands of Time) came highly recommended from Andy Serkis and fortunately for the audience the filmmakers listened.

Rather interestingly, the film’s main protagonists are all either English or Australian. Andy Serkis, Toby Kebbell and Gary Oldman are all British while Jason Clarke and Kodi Smit-McPhee are Australian. Only Keri Russell and Kirk Acevedo are American actors.

Cloverfield director Matt Reeves helmed Dawn of the Planet of the Apes and this serious sequel must have impressed the studios even before it hit cinemas. Reeves is already signed up to write and direct the next sequel in the franchise which is being called the Untitled Planet of the Apes Sequel for 2016.

In terms of visual FX and cinematography this one makes the first film in the franchise look almost awkward. The computer generated imagery and the performance capture cinematography is flawless. At one point in the film the camera zooms in for a “Sergio Leone” type closeup of Caesar’s face and there is no doubt in the audience’s mind that this ape is real.

The sets and their designs also look spot on. The ape-built colony and the ruins of San Francisco all look as though one could enter the movie screen and really interact with these set pieces. Of course this could be aided somewhat by the film’s use of 3D. Overall the film is stunning, both in looks and performances, and the storyline for this sequel is logical and does not deviate from the first movie’s verse.

In Dawn of the Planet of the Apes the world has moved on from the virus, labelled the simian flu by survivors of the man-made drug, which decimates the human population drastically. Caesar and his genetically altered followers live in the forest where they escaped in the first film.

Humans have gathered in a very large “colony” in the remains of San Francisco and they are trying to turn the electricity on. The two factions clash fairly early in the film and Caesar annoys Koba by sanctioning a small group of humans who want to turn the lights back on.

In this sequel, we learn a bit more about the scar-faced Koba. While the ape doesn’t speak quite as much as the almost verbose Caesar, Toby Kebbell who plays Koba, keeps up with master Andy Serkis in terms of believable “ape-speak.”

In terms of pace, this film almost moves languidly compared to faster moving action movies on offer right now but the focus on story and character development kept the audience completely engrossed with what was happening onscreen. The slow, yet eventful, movie has a wonderously epic feel. While some of the plotline may have felt a bit cliched at first, it still works.

Dawn of the Planet of the Apes is a serious sequel to the first “Apes” film. Shot in 3D it does almost feel as though the action surrounds the audience even if it there are not any real “coming-at-you” moments it is still impressive. The screening audience applauded at the end and overall the response was great. Dawn of the Planet of the Apes opens in cinemas nationwide today July 11. Prepare to be epically mesmerized.