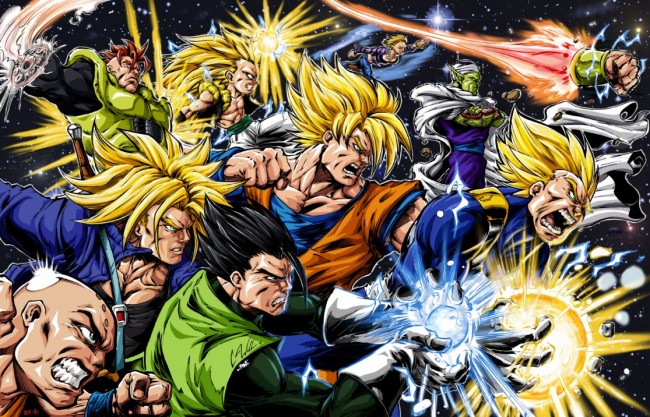 In the September issue of Shueisha’s V Jump Magazine announcing that a new Dragon Ball Z movie is set for a 2015 release, the new film credits the original creator of the franchise, Akira Toriyama, with the concept, story, and character designs for the movie. The new movie will open during the “Golden Week” string of holidays next spring.

Toriyama confirmed that his new film will tell a new story. He previously had intentions of making the movie a continuation of the manga’s original serialization. The Dragon Ball Z creator described that his process in this movie is different, citing that he is not spending as much time with character designs since their likenesses are so grounded and solidified given the length of the series, but he is spending lots of time over little pieces of dialogue. He also teased that the new movie will have many action scenes, and although no details were disclosed, he promises that the story of the new movie will be uniquely funny.

Toriyama emphasized the work he put in, and is still putting in, to the new movie by stating that his original editor for the manga series complimented him on his work, which is something the famed manga editor reportedly rarely does. Toriyama is confident that fans at all levels on passion and involvement will be able to enjoy the new movie.  Aside from the new Dragon Ball Z movie set for 2015, the original creator, Akira Toriyama, also wrote the 2013 film for the franchise: Dragon Ball Z: Battle of Gods which was accepted positively by the fans of the series.

The Dragon Ball Z series (commonly known as DBZ) is the sequel to the original anime television series produced by Toei Animation. The show adapts the last 325 chapters of of the 519 present in the original Dragon Ball manga series written by Akira Toriyama. Those were published from 1988 to 1995. The television series first aired in Japan on Fuji TV prior to being dubbed for expansion into Australia, Europe, the United States, India and Latin America.

The Japanese run of Dragon Ball Z was extremely popular with average viewer ratings of 20.5 percent. Their success did not stop in the United States. The premiere of Season Three of the program in 1999 was, at the time, the highest rated program ever on Cartoon Network. In 2002, in the week of September 22, the dubbed anime was the most watched program amongst boys nine-14, and men 12-24.

The production company behind Dragon Ball Z hopes to gain an even bigger audience with their new 2015 movie set from the ideas of the original creator, Akira Toriyama. The film does not have a director attached, nor has Toriyama expressed interest in directing the film himself. However, he does promise that movie will be one of the finest segments in the series, and something that the most hardcore fans and first time viewers of the series can enjoy. No month or day has been given for the release of the film.