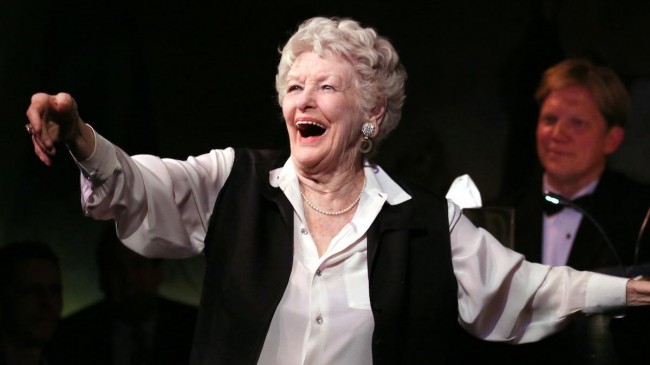 Elaine Stritch has died at the grand age of 89. Many have shared their condolences for the family, and remembered her for her amazing acting abilities and her blue-collar attitude. She was fortunate enough to turn her passion into a job for over 60 years.

The Broadway actress died in her home on Thursday, according to her close friend, Julie Keyes. The cause was reportedly age-related, although an autopsy will need to be carried out.

At no point did the raspy-voiced actress claim that she was perfect. She made apologies for her alcoholic ways, along with being a “pain in the ass.” Her drinking problem led to a one-woman show on the New York stage in 2002 where she shared a narrative of her problems. That led to winning a Tony award. She was also nominated four times for Best Actress at the Tony awards.

Her acceptance speech for the one Tony award she won was cut off by a commercial at the time. It is something that audiences still remain angry about.

Stritch was living in Birmingham, Michigan at the time of her death. She had only moved there last year so that she could be with her family. Before that, she has spent many years living in Manhattan at the Carlyle Hotel.

The 89-year-old has been described as a down-to-earth performer with a very blunt attitude. Audiences were drawn to her raspy voice, and loved her charisma on the stage. She drew in audiences throughout the decades, starting her career in the 1940s.

Now Stritch has died at the age of 89, but will always be remembered for her work. She did not just limit her acting to the stage. She was part of the 30 Rock team, playing Alec Baldwin’s mother. Before that, she made appearances in September and Small Time Crooks on the big screen.

However, she did always prefer the stage, and that included musicals and solo shows. One song that she will always be remembered for is Ladies Who Lunch. She made that song her own and now many will never be able to think of anyone else when they hear it.

Stritch decided to cut back from acting four years ago. Her final Broadway performance was in A Little Night Music in a role previously performed by Angela Lansbury. Unlike many others who would have struggled to follow on from such an iconic star, the then-85-year-old brought her personality into the show and owned the role. It was as if nobody had ever done it before her.

She did perform after that, but it was only small parts and the odd one-off performance. Her health was deteriorating, and many acknowledged that her memory was suffering.

The Emmy-winning actress is one that many will be able to look up to. She spoke her mind, and never apologized for her own opinions and views. She knew what she wanted and worked hard to get it. It is just a shame that it has all come to an end, with Stritch’s death at the grand age of 89.