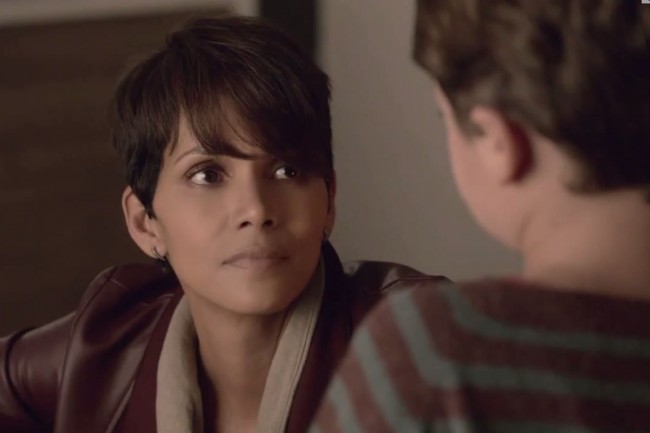 The mystery slowly unfolds with Extant’s new episode. The new sci-fi series, produced by Steven Spielberg and Halle Berry, aired last night on CBS was won over big with the ratings. Here is a recap of Extant, episode 2.

The show begins with Molly, played by Halle Berry, sleeping in bed by herself. She wakes up and hears some kind of strange sound and goes to investigate. Molly heads downstairs where this sound, almost like a heart beating, seems to be coming from. She finds herself in front of the dryer. She opens it up to see a pair of running shoes. Molly seems relieved that it was just shoes and nothing more, or was it? She turns the dryer off and meets John, played by Goran Visnjic, in the kitchen.

John and Molly have a short conversation before he leaves for work. John tells Molly that Ethan has a birthday party to go to and that the present is already bought. John had gotten a video for Ethan to take to the party. Handing her coffee she relishes in its delightful taste saying that in space, the worst thing to handle was the coffee. Clearly Molly has had a slight relapse in memory forgetting that she was visited by her dead boyfriend, Marcus in space and that should take the number one spot. John also reminds Molly that Ethan also has a meeting with Yasumoto and she would have to make sure he makes it.

Meanwhile Sam Barton, played by Camryn Manheim, is at the space agency where she and Molly work and is going over some medical scans of Molly’s. Sparks enters and wants to know where Molly’s test results are and Sam answers nonchalantly that she would have them for him very soon. When Sparks leaves, Sam looks obviously worried about what she is going to do.

On last weeks episode we saw John getting financed privately by Yasumoto to continue his robot project. On episode 2 of Extant, John arrives at his new laboratory. His colleague Julie, played by Grace Gummer, is there as well as the rest of the team. Julie states that she was so excited she had come earlier to get a jump-start on setting things up. She shows John his new desk with his spectacular view. Both Julie and Femi Brown, who is on the original board that John had asked for funding but was rejected, asks John just what was it that got Yasumoto to give in.

Viewers are then brought to Molly and Ethan playing a 3D game that resembled Jenga on steroids and for space. Molly is not as good as Ethan is and her first try, everything crumbles and then disappears. The tension between the two is still visible after last weeks episode but Molly is trying her best. She tells Ethan that being with him and John is her favorite place to be. Ethan had thought that her favorite place was in space, as she was there for over one year.

John explains that before the brains are put into the androids, they are first grown in labs, allowing the brains to develop before using them. Femi has issues and serious concerns about people having connections with these androids. Though John offers for her to have a chat with his son, Ethan to see how alike the androids are, she is not convinced. Femi states that she is not impressed that Yasumoto went behind the boards back and is funding John’s project privately.

John notices Ethan’s brain activity spike and intensify and chalks it up to him being at the museum and clearly stimulated. The truth is a bit more serious.

Molly suddenly collapses on the floor grabbing at her stomach in obvious pain. Ethan walks in and sees Molly lying there and notices these circles push up from her stomach, through her clothes and then retract, disappear. Later at the museum, Ethan shows he has no fear as he faces a storming elephant simulation.

Molly still cannot wrap her head around the fact that she is pregnant and tells Sam that maybe she is having a hysterical pregnancy. Sam says she will give Molly an ultrasound but in a different facility where there will be no record of it. While the children continue to tour the museum, Molly tells Sam that she does not trust Sparks and that Harmon is back and that he said to trust no one. Sam isn’t buying that Harmon is still alive and worries that Molly is having hallucinations. Sam explains that Harmon had hallucinations too and that she thinks Molly has what ever Harmon did. Sam says that both Harmon and Molly have the same brain abnormalities.

When Molly finds him, he is alone talking with a robot. When Ethan asks Molly not to tell his father, she says that they will keep both their secrets from him, so he would not worry. She would not tell John that Ethan ran away from the group and Ethan will not tell his dad about her falling to the floor earlier.

The show ends with Harmon watching Molly and Ethan in the museum. Then he is back on the Seraphim space station where Molly was just on a 13 month stint. Suddenly there is a solar flare just like what happened with Molly. The power goes and Harmon then goes to investigate and in the same spot where Molly saw her dead boyfriend Marcus, Harmon sees his mother.

Episode 2 of Extant is slowly revealing its secrets and the viewers are loving it. Thanks to Big Brother and Extant, last night CBS had the highest ratings. Halle Berry on TV with this new hit series is a definite treat for fans. Extant airs Wednesdays on CBS at 9EST.