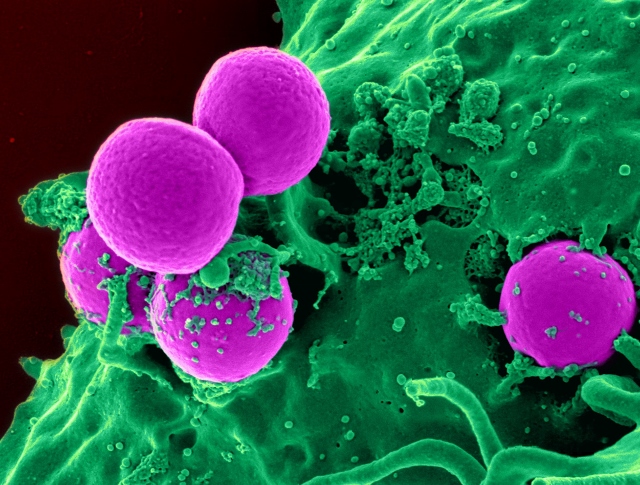 Hospitals have been fighting a losing battle against bacteria for over 50 years, mostly due to the fact that their primary weapons have all been antibiotics. After the initial deployment of antibiotics so many years ago, they have become so widely used that the bacteria eventually have battled against them enough to build up resistance to the weapon. Even the newer, more complex antibiotics have difficulty killing these pathogens. The mutated superbugs are now found commonly colonizing surfaces in hospitals, waiting to infect weak and infirm patients.

Despite the serious public health concerns posed by these bacteria, many hospitals still have only one main weapon to deploy against them, antibiotics. America’s hospitals have not seriously invested in any other way to fight the epidemic. In fact, many hospitals like to pretend, on paper at least, that the problem does not even exist, speaking of it only in hushed voices in lonely corridors when they believe the patients and their families are not within earshot.

However, some hospitals have recently acquired a device based upon an old idea. This device can be used to exterminate even the toughest strains of bacteria. These are the exact same strains which doctors and healthcare workers had grown to fear and yet they are all but gone after only one sweep of a room.

The device is called a UV-C emitter. It is essentially a large tube-like bulb that emits ultraviolet radiation falling within the spectrum of light which exists just above that of visual light. Such devices have been used to clean water supplies for years, but until very recently, had not been used to disinfect air. This is mostly due to fact that the sheer intensity of the UV-C radiation can harm plastics and other fibers, as well as possibly damage human eyesight, unless proper eye protection is worn.

UV-C emitters which are designed to disinfect surfaces first flood an area with their intense radiation. That radiation, while unable to penetrate human skin, can easily pass through even the toughest membranes of nasty bacteria like vancomycin-resistant enterococci, Clostridium difficile and methicillin-resistant Staphylococcus aureus (MRSA). These bacteria, alone, cause tens of thousands of deaths each year in American hospitals.

As with any weapon deployed in a time of war, whether against other humans or a war waged against microbes, this new device is not perfect nor even completely ideal. One potential drawbacks to using these emitters, according to several studies, is that while they do destroy significant proportions of dangerous microbes that live on surfaces, they do not eliminate all of the bacteria. Other studies have shown that the UV-C emitters, like traditional disinfection methods, have difficulty in disinfecting hard-to-reach or awkward surface areas, like those that exist within cabinets and laboratory cupboards.

For large empty spaces in some hospitals, like patient rooms and hallways, UV-C emitters approach being the perfect solution to destroying dangerous bacteria. For instance, Milford Regional Medical center in Massachusetts currently uses two emitters. They are programmed to roll about into different recently-vacated rooms.

Once inside, the UV-C emitters begin bathing every surface within reach in ultraviolet rays to fight off the many pathogens which like to colonize surface areas in hospitals. However, even then, studies have found that the emitters only destroys around 95 percent of those microbes, leaving the other five percent to be killed using traditional disinfection methods. Other studies performed in hospital environments have yielded similar results, indicating that this weapon may not be as effective as its developers claim.

Considering that most hospitals already manually disinfect rooms and other areas or at least are supposed to do so, the fact that these devices do not kill 100 percent of the microbes is likely not going to be enough of a drawback to stop their implementation in other institutions. This is especially true as health care professionals and hospitals zero in on combating Hospital Acquired Infections (HAIs). Patients get HAIs from pathogens in certain areas of hospitals, from coming into contact with the bodies of medical personnel working in hospitals and even from the instruments used by hospital personnel.

The bitter fighting that is now occurring in every American hospital in the continued war waged against opportunistic and the antibiotic-resistant bacterial epidemic is unlikely to be stopped by the deployment of any single weapon, like the use of antibiotics. No matter how many bacteria they kill, the UV-C emitters still fail to eliminate all of the them. Also, the UV-C emitters do nothing about eliminating the source of the bacteria. Until humans change the institutional policies that created the epidemic in the first place and which perpetuate its existence to this day, no amount of money, new toys or even new therapies will end patients contracting HAIs due to bacteria that live in hospitals.