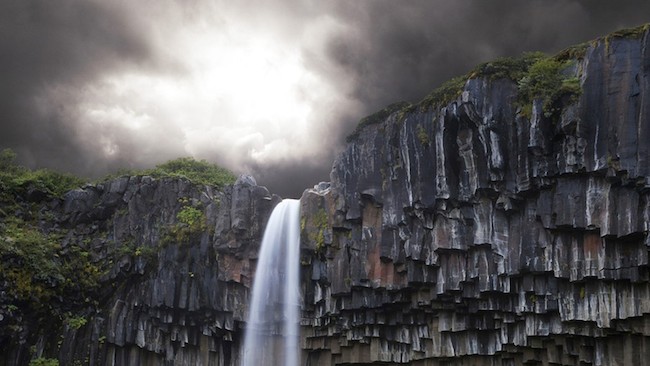 Work was stopped on a new road in Iceland recently in response to protestors who say the highway would disturb the lives of elves living inside rocks along the way. Work on the road will remain at a standstill until a solution is identified.

Highways spokesperson Petur Matthiasson said that his department received warnings about the elves and “well, we have to respect that belief.” He was sure to advise a BBC reporter that he himself does not hold such beliefs, nevertheless, national surveys reveal that more than 50 percent of Icelanders believe in – or at least are open to the possibility – that “the hidden people” or Huldufolk exist.

In Iceland, elves are not miniscule, green and pointy-eared but full-sized humans and invisible to most people. Although they are generally peaceful they really don’t like being disrespected, such as blowing up their stone homes and churches. Matthiasson, the non-believer, recounted stories of bulldozer breakdowns and a series of worker accidents with elves as the most-believed suspects.

Adalheidur Gudmundsdottir, a Professor of Folklore, said that one cannot live in the Icelandic landscape “and not believe in a force greater than you.” Iceland is raw and rugged, with active volcanic pots, black and craggy mountains and brooding clouds. She suggests that a simple look around will bring the observer to the understanding of why folklore is so strong there.

Scots also believe in such storybook creatures in great numbers. One is Sir Iain Noble, who owns the Hotel Eilean Iarmain on the Isle of Skye. He insists that the existence of fairies (creatures similar to elves) is “beyond question,” saying that fairies’ houses are close to his inn, “and we have records of conversations between fairies and people on the island.”

Road work has come to a stop in Iceland before because of elves. Hundreds of visible humans, protesting on behalf of the invisible ones, blocked bulldozers hundreds from building a route from the Reykjavik suburb of Gardabaer to the Alftanes peninsula.

Another folklore professor, Terry Gunnell, said he was not surprised by the wide belief in elves, echoing Gudmindsdottir’s description of the Icelandic landscape, and saying that one’s home can be destroyed by the unseen (such as earthquakes), where winds blow people over and the insidious scent of sulphur is a reminder that invisible fires smolder “not far below your feet.”

Icelandic folklore describes some Huldufolks as good, or “light,” while others are bad, or “dark.” Light elves believe in Jesus Christ and go to churches which they have built into rocks.

Mythical beings are those that have not yet been proven by science but have nevertheless been spotted by the public and sometimes even captured by cameras. Road work in Iceland may have recently been stopped because of elves, but mythical creatures have existed throughout world history all across the globe. Other such creatures still believed by some to be in existence include Bigfoot in the Pacific Northwest of North America; golem, a human-like being created from inanimate matter (Jewish folklore) in the Czech Republic; the tengu, a long-nosed, protective human-ish spirit that lives in Japan’s mountains and forests; and the Mongolian Death Worm, a two- to five-foot invertebrate that spits deadly electricity and corrosive acid.