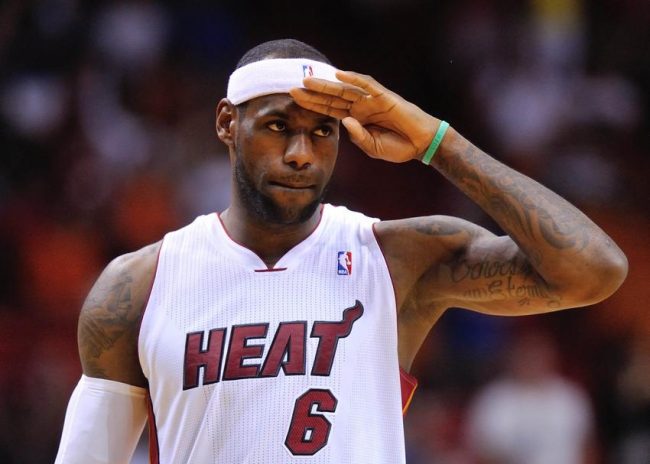 With reports that Lebron James’ agent, Rich Paul, has spoken with five teams about his new contract, the best player in the NBA appears fully in play for a number of suitors as the Miami Heat’s efforts to bolster its roster look stalled. Pat Riley faces a herculean task of finding salary cap room for James’ maximum contract while adding to his supporting cast at the same time. Unlike 2010, the Big Three of James, Dwayne Wade and Chris Bosh do not appear to be acting in concert, as reports indicate that Bosh and Wade are as much in the dark regarding James’ intentions as anyone.

Now that Wade and Bosh have followed James by opting out of their contracts, their loyalty to James does not appear to be rewarded with any inside knowledge as to how James intends to proceed. At least financially, Bosh will likely suffer no ill effects from being left in the dark. Even though the big man has taken some criticism about his performance in the NBA Finals, he remains a highly sought after free agent. Wade finds himself in a different situation. Having played with the Miami Heat his entire career and acting as a recruiter of James and Bosh in 2010, Wade is now marginalized as LeBron James decides on his future and the Heat stall out on adding younger talent.

The Heat may remain James’ destination of choice, but the recent actions of agent Paul will amp up the pressure on Riley to pull off another miracle. The top-tier younger free agent talent such as Kyle Lowry and Marcin Gortat have signed on with their existing teams. The young guns do not appear to have any desire to offer Miami a discount for playing on a contender, particularly if James’ intentions are unclear. Pau Gasol remains a possibility, but he reportedly wants a contract in the range of $10 million annually, which would be a stretch for the Heat unless Bosh and Wade make major concessions.

If James decides to play elsewhere, Riley will face a difficult decision as to Bosh and Wade. If the Heat could not get over the hump with the Big Three playing together, signing only Bosh and Wade could be an admission of defeat unless a third top-tier player is added. By all accounts, Wade expects to be fully compensated for giving up $40 million over the next two seasons by receiving a more cap friendly deal in the range of $55 million over four years. Riley could have difficulty dealing with player contract negotiations in the future if Wade’s loyalty and contributions are not rewarded. Nevertheless, paying an aging Wade for his prior contributions will tie Riley’s hands if a rebuild or reload is necessary in the near future.

As LeBron James allows his agent to speak with the Houston Rockets, Dallas Mavericks, Cleveland Cavaliers, Phoenix Suns and Los Angeles Lakers, his decision on a preferred destination remains fully in play as the Miami Heat’s efforts to revamp the roster appear to have stalled. Pat Riley previously spoke out about James needing to show his guts by taking another shot with the Heat. At this point, Riley will need to show his creativity and guts by finding a way to keep James in the fold. The pressure is on Riley, not James.