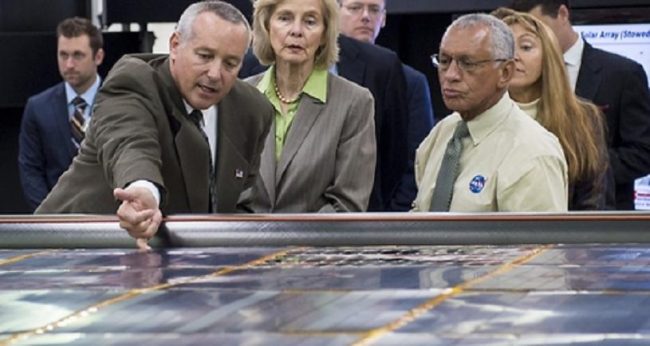 In October 2012 the space administration selected Deployable Space Systems, along with ATK Space Systems, Inc., both of Goleta, California, to develop the next generation of solar array systems for use in electric spacecraft propulsion systems. The two companies were awarded 18-month contracts to complete Phase 1 of the program. The contract awards had a minimum value of $5 million, to a maximum of $7 million.

As with Phase 1, Phase 2 of the program will be awarded to one or both of the companies, and is undertaken by NASA’s Space Technology Mission Directorate. The National Aeronautics and Space Administration, Glenn Research Center in Cleveland, Ohio, manages the program, led by director Dr. James Free.“These new solar arrays will not only enable new NASA missions, but they offer the promise of reducing the cost of commercial satellites so we expect this investment will have a significant payoff for U.S. industry.”

General Bolden was accompanied on his tour of the DSS facility by DSS President Brian Spence. Spence is the founder of DSS and formerly worked for AEC-Able Engineering and ATK Space Systems. “The testing of the DSS array is a major milestone toward development of a new solar electric power system that will generate the high power needed for extending human presence throughout the solar system.”

The latest Advanced Solar Array Systems technology that NASA chief Bolden is keeping tabs on is called ROSA, (Roll Out Solar Array) and is the latest cutting-edge solar propulsion system. It is said to be more cost-effective, lighter and more compact than previous versions. This will allow for superlative fulfillment of mission objectives, which include affordability and stowability. The flex-blanket composition of the solar array panels was calculated to maximize performance, thereby enabling high voltage power levels to the spacecraft. The Mega-ROSA construction incorporates a conglomerate of malleable, high voltage, “Winglet” type components into the highly adaptable backbone structure within the solar array itself. 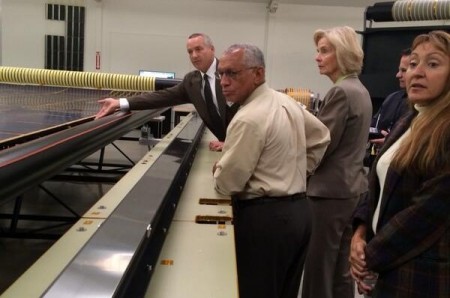 Deployable Space Systems was tasked with manufacturing two 15–20 kilowatt Roll Out Solar Array winglets. These winglets will be approximately 4.5 meters wide and 14 meters long. Currently, DSS Mega ROSA prototypes have been declared fully functional during over 100 previously successful deployments, at various temperatures. With Phase 1 coming to an end and Phase 2 on the horizon, the timing of General Bolden’s tour is seen in scientific circles as a review of the Phase 1 contracts, and a precursor to a valid choice being made for Phase 2.

ATK Space Systems, the other contractor involved in this mission, was tasked with reducing the size of the “Megaflex” panels, a larger version of the more popular “Ultraflex” solar panels which have been used extensively, most recently on the Mars Phoenix Lander. The major difference between Ultraflex and Megaflex is the improvement demonstrated by how the solar arrays are folded and stored for launch. With Megaflex providing more power than Ultraflex, and fitting into the same launch space, a distinct advantage has been gained in overall electrical output when balanced against launch size and cost containment protocols.

The two contractors have been given different assignments and both could very well be awarded Phase 2 contracts, in keeping with the original mission directive. With NASA’s Charles Bolden keeping close tabs on this latest version of Solar Array Technology, the future of solar propulsion seems assured. It would appear that Deployable Space Systems and ATK Space Systems are up to the task.