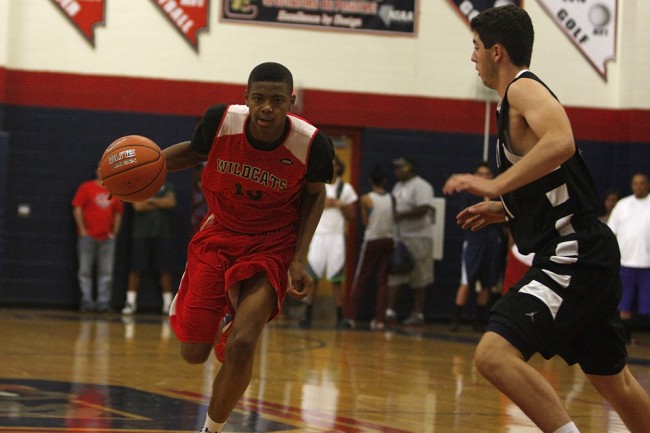 Ray Smith, one of the top high school basketball players in the country, has suffered a torn ACL at the adidas Unrivaled basketball camp in Chicago. Currently ranked as the tenth best recruit in the country by Rivals.com, Smith, a small forward from Las Vegas, has received offers from Arizona, UCLA, Oregon, Connecticut, Georgetown and others.

In the last year, the 6’8″ long and athletic forward has climbed the charts along the basketball circuit, earning a score of 90 and five stars by ESPN. On Thursday night, Smith planted his foot in an attempt to go past the defender, but immediately fell to the hardwood, clenching his knee before having to be carried off of the court. After initial optimism by adidas officials following Smith’s injury, early reports on Friday morning have stated that he has torn his anterior cruciate ligament (ACL). The injury, which will most likely require surgery, may have Smith sidelined from anywhere between six months to a year, and a promising basketball future, which has done nothing but get brighter in the last year, is now in question.

According to Dr. Tarek O. Souryal, M.D., the head physician for the Dallas Mavericks, an ACL tear is most often a non-contact injury, usually sustained when a player attempts to cut and plant their foot, which can result in one of the four ligaments in the knee to tear. The ligament, which acts as a stabilizing force, allows for rotational movement in the knee and once the knee buckles, an MRI is performed to diagnose the injury. For Smith, the long battle to recovery begins today, and as Chicago Bulls fans have seen with Derrick Rose and his ACL injury, it can be a very long and drawn out rehabilitation before a player can return to the court.

The adidas Unrivaled camp is in its inaugural year, hosting some of the top 100 high school players in the country. Although LeBron James is hosting his annual camp in Las Vegas this week, which draws the majority of coaches, scouts, and attention, Unrivaled still boasts some of the best talent alongside Ray Smith. Some of the top talent includes Jaylen Brown, a 6’6 small forward from Wheeler High School in Alpharetta, Georgia, and Brandon Ingraham, a 6’8 small forward from Kingston High School in Kingston, North Carolina.

In the past, an ACL injury could have spelled complete doom for an athlete. However, advances in arthroscopic surgery have helped increase the possibility of a return to the sport in a somewhat reasonable timeframe. At one time, it was considered to be a career-ending injury, yet today, it is estimated that 96-98% of players who suffer the torn ligament can eventually return to the game. This is good news for Ray Smith, who is still young and has plenty of time to recover. Yet it still acts as a major blow to what his future holds. Whether it is a college athletic department or executives at the professional level, a knee injury will always have the experts weary on a complete recovery. For Smith, the road to recovery begins today, and with hard work his hopes of playing Division 1 basketball must still be alive, and if fully able to recover, he will still look to make an impact on the college basketball stage.