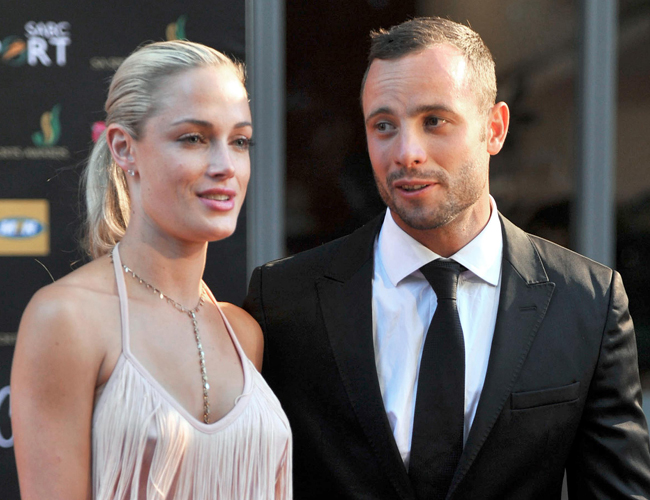 In a world exclusive, an American broadcasting company is set to release a secret video that reveals murder-accused Oscar Pistorius re-enacting how he killed his gorgeous girlfriend Reeva Steenkamp. A promotional “trailer” (see below) was released Saturday showing him pumping four bullets into a door killing her, and carrying a supposedly dead woman similar in size to his now dead girlfriend.

In the trailer released by Seven Network’s Sunday Night, the world-famous Olympian is seen “running” on his stumps, as if with gun in hand (although he is not holding a weapon), his right arm totally outstretched – a stance that appears to conflict with evidence he has given in court. Then you see a figure facing what looks like the now infamous toilet door, shouting “get out get out! Get the f*** out!” He is also seen in what purports to be his bedroom shouting, “Baby call the police,” and later, can be heard in the background screaming “help, help.”

The trailer shows that the entire crime scene was rebuilt for the video. Reeva’s parents are also featured in the video, and the trailer has June Steenkamp saying: “How did she end up with someone like this?” and, “She said that we’ve been fighting, fighting a lot…” It also shows Reeva saying happily: “He’s a very, very sexy boy!” Pistorius is seen in the trailer strapping on his prosthetic legs – it appears, to time how long it would have taken him to do this. It also shows him with his legs on carrying “Reeva.” This, too is in conflict with the evidence he has given in court.

There has been no explanation for the production of the video and whether it might initially have been intended as court evidence. Reports state that the video was filmed by a U.S. company that creates graphic, visual illustrations of crime scenes specifically for use as evidence in criminal trials. The footage, which is powerful and chilling, has persuaded Scott Roder, described as a top American “forensic investigator,” that Pistorius is telling the truth. It has also been reported that Roder analyzed the crime scene for the defense. It is not clear whether Roder was commissioned to do the analysis or whether he did it because of his conviction that Pistorius is innocent. However, it has also been reported that the attorneys representing Oscar Pistorius will be taking legal action against the Australian channel.

Shortly after South African journalists following the trial tweeted news about the secret video, it appeared to have been removed, at least in part. A message, “This video is not available to users in your location,” appeared on many screens. Nevertheless, the power of internet kept the promotional secret video alive, and it could still be accessed by South Africans late this afternoon.

Pistorius shot Reeva Steenkamp dead in the early hours of February 14 last year by shooting through the locked toilet door in his en-suite bathroom. Although he says they were together in bed shortly before the incident, and that he spoke to her, he has maintained throughout the trial that he did not know it was Reeva in the toilet and that he shot her thinking she was an intruder. The state maintains that he did know it was Reeva behind the locked door, and that he shot at the door intending to kill her.

The trial that began in March this year is nearing the end, with what is understood to be the defense’s last witness currently in the stand under cross-examination. There is also a possibility that the state will call an additional witness next week as state advocate Gerrie Nel was meeting one of the psychiatrists who was part of the panel who recently “observed” Pistorius at a psychiatric hospital for 30 days to ascertain whether or not he had a “mental defect.” While the panel delivered their own verdict of no mental defect, Nel said he needed more information, was meeting with the psychiatrist Dr. Carla Kotze on Friday, and would be launching an application on Monday (tomorrow).

During the trial, the state built a set in the courtroom that was the same size as the toilet, and it was used by both sides to show how Oscar Pistorius shot at the door, where the bullets went, and what happened to Reeva’s body. While the secret video to be aired by Channel Seven’s Sunday Night will show a much larger set, it is not yet known what kind of detail will be revealed, other than the fact that Oscar Pistorius re-enacts the killing of Reeva Steenkamp, presumably in an endeavor to prove his innocence.