Smallpox the Only Disease in Humans to Be Eradicated Through Immunization 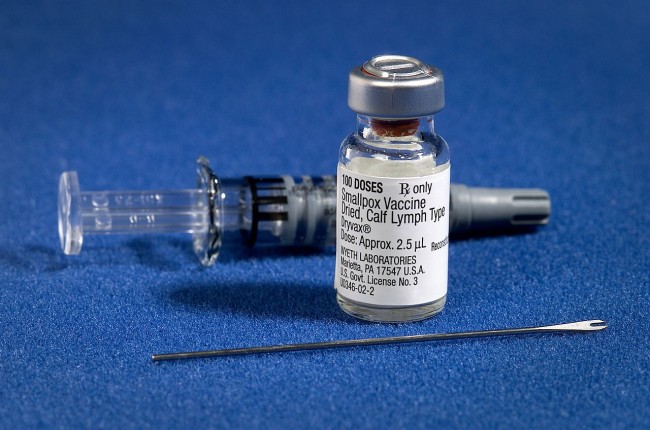 The small round scar on the upper arm of most Americans over 40 is the evidence of the defeat of the only human disease to be eradicated through immunization, the deadly smallpox. The last known case occurred in 1977 in Somalia. The World Health Organization (WHO) declared the disease eradicated in 1980 following a global immunization campaign. Routine vaccination against “Variola virus” ended in American in 1972.

After the declaration that the disease was eliminated worldwide, an agreement was reached that any remaining stocks of the virus would be destroyed or sent to secure laboratories at Russia’s State Research Center of Virology or the Centers for Disease Control and Prevention (CDC) in the U.S. Last week, however, a forgotten carton of smallpox vials was found at the Bethesda Maryland campus of the National Institutes of Health as employees cleaned the lab in preparation for a move to the main campus of the Food and Drug Administration (FDA) in White Oak, Maryland.

The only human disease to have been wiped out by immunization, smallpox dates back thousands of years, likely present in Europe by approximately 300 CE. Twentieth century worldwide deaths numbered more than 300 million.

Initial signs of the disease typically appear 12 days after exposure, with flu like symptoms that often disappear after one or two days. Secondary symptoms appear by day four with the first painful lesions appearing in the mouth, throat and nasal passages. The skin rash manifests about 24 hours later, forming pustules that may run together in “confluent” smallpox, resulting in a mortality rate of about 60 percent. If the pustules did not run together the victim had a fairly good chance of survival, although severe scarring would occur. In some people the skin rash was internal, causing hemorrhaging through mucous membranes and under the skin. These patients died early, miserable deaths, bleeding through eyes, nose and gums.

As the rash worsens in the mouth and throat, dehydration frequently sets in as drinking becomes difficult. About 10 days later the pustules soften, turn blistery and painfully crack and run before beginning to scab over. Secondary bacterial infections frequently set in, whose consequences were often as severe as the smallpox itself. People who survived an infection were immune to further infection.

The virus is spread most efficiently in droplets or aerosols from the oropharynx of infected individuals, or through contact with smallpox sores, or respiratory droplets. Even handling contaminated bedding and clothing could cause infection. Eighteenth-century Americans developed two weapons against the disease: inoculation and isolation. Edward Jenner discovered immunization against smallpox using cowpox virus in 1796. Inoculation, the deliberate infection with the Variola virus, was a method requiring quarantine since the inoculated individual invariably came down with with the disease itself, creating the possibility of starting an epidemic rather than preventing one.

The first outbreak of the virus in America occurred in 1633-1634 when European settlers introduced the disease. Native American tribes in the New England area were decimated, with populations plummeting by over 70 percent.

Modern smallpox vaccines are made from a live, related pox-type virus. Because the virus is live the vaccination site must be cared for to keep the virus from spreading, although it cannot transmit the disease. There is a high level of immunity for 3-5 years, and the vaccine has been 95 percent effective in preventing infection.

Although smallpox has been eradicated worldwide, there is still enough human vaccine stockpiled in the U.S. to immunize the population of the entire country in case of emergency. Vaccine production was discontinued in 1983.

Smallpox the Only Disease in Humans to Be Eradicated Through Immunization added by Beth Balen on July 9, 2014
View all posts by Beth Balen →