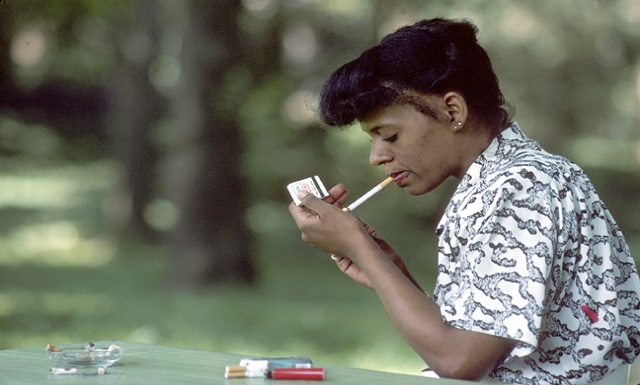 New study suggests menthol flavoring in cigarettes make it harder for African-American women to kick the habit. The study published online by the journal Addiction states the addition of menthol flavoring may strengthen the struggle for black women. The study was completed by investigators from the University of Wisconsin Center for Tobacco Research and Intervention (UW-CTRI) using a series of analysis during a large “quit-smoking” clinical trial. During the trial UW-CTRI found that variables such as peer smoking, education and type of medication did not change their findings.

Steven Smith, UW-CTRI Researcher, said although the study’s findings suggest menthol makes it more difficult for African-American women; further research is needed to understand the results. According to Dr. Michael Fiore, UW-CTRI Director, menthol flavoring reduces the harsh taste of cigarettes for some people. Research has long shown that menthol, like banned flavoring, for many smokers has likely paved the road to addiction. The findings of the new study support prior research which suggests menthol has the potential make an already lethal product more addictive.

Lloyd “Spud” Hughes from Ohio is credited with introducing American smokers to menthol flavored cigarettes in 1925. Spud, as he was known, came up with the idea of adding menthol flavoring to cigarettes because he felt it would give the illusion of a “cooler” smoke. Thus was born the first widely sold menthol smokes in America, Spud brand cigarettes. Spuds had grown to become the fifth most popular cigarettes in the country by 1932.

Spud’s successful concept caught the attention of the Brown & Williamson tobacco company and their own menthol brand called Kool was birthed. Kool cigarettes were initially targeted to upscale smokers, hence the mascot of the penguin sporting a top hat and monocle. By 1956 menthol smokes had really taken off when R. J. Reynolds introduced Salem brand cigarettes. Salem hit the market as the first filter-tipped menthol smokes.

Although the filter nor the menthol safeguarded smokers from the dangerous effects of smoking, tobacco companies relentlessly promoted menthol smokes as being “fresher” and implied they were somehow more healthy. According to Phillip Gardiner, a research scientist at the Tobacco Related Disease Research Program at the University of California,

Menthol cigarettes have been marketed to some of the most vulnerable segments of the population. For half a century, people with the least resources and the most to lose have been the target of this product.

UW-CTRI is a nationally recognized research center founded in 1992 and committed to determining the nature of tobacco dependence and developing evidence-based treatments to assist smokers. UW-CTRI has generated more than $100 million in grant funding and assisted more than 200,000 smokers. UW-CTRI is part of the University of Wisconsin School of Medicine and Public Health.

New study suggests menthol flavoring in cigarettes make it harder for black women to kick the smoking habit. The study published online by the journal Addiction was completed by investigators from the University of Wisconsin Center for Tobacco Research and Intervention (UW-CTRI) and sponsored by the National Heart, Lung and Blood Institutes. The authors added that it is important to note that people who smoke menthols can quit smoking. Anyone in the U.S. who smokes can get free help by calling 1-800-QUIT-NOW

UW-CTRI
The Atlantic
Legacy for Health

One Response to "Study: African-American Women Struggle Most to Quit Smoking Menthols"