Tropical Cyclone Downgraded in US but New Storm Threatens Japan 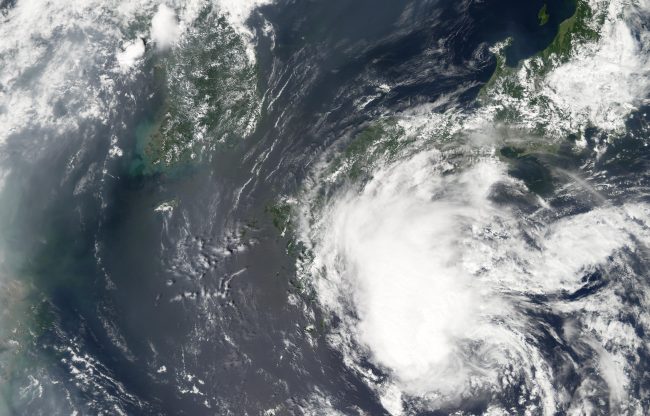 The first tropical cyclone to become a hurricane this year, Arthur, hit the U.S. and has now been downgraded to a post-tropical storm, but a new storm now threatens Japan. The Joint Typhoon Warning Center first upgraded Tropical Storm 08W from a tropical depression and has now labeled it Typhoon Neoguri.

At its strongest stage Arthur reached Category 2 hurricane status and hit the Outer Banks of North Carolina before tearing tore through parts of New England and eastern Canada. This was the earliest point in the year that a hurricane has made landfall in the state of North Carolina. Over 100,000 have lost power in the Nova Scotia area, where winds continue to be strong, but weakening. Nova Scotia Power expects to have power restored to most of that area before midnight Sunday. The tropical cyclone is expected to continue to diminish as the tropical cyclone encounters colder water in the North Atlantic.

In the seas around South Korea and Japan, however, Typhoon Neoguri is expected to be elevated to a super typhoon. Initially, the storm was thought to have a high probability of reaching land but the impact of the tropical cyclone now seems slightly diminished for mainland regions. Regardless of the exact path it takes, Neoguri, which was southwest of Guam when it was elevated to a tropical storm, is now closing in on the Ryukyu Islands where gusts of wind are expected in excess of 100 mph. Storm surges as could peak above 20 feet and rainfall is expected to surpass 8 inches on some parts of the islands.

The effects of Neoguri will depend on the exact path it takes as it heads north. Its initial trajectory has been to the northwest but as it nears the Ryuku Islands it is expected to turn more northward and then northeast as it nears southern Japan. Some of the change in direction may also be affected by a cold front in the eastern Asian region. Ultimately the Philippines could see strengthening monsoon conditions and flooding, while South Korea and Japan expect to see heavier rains and gusty winds for the most part.

Back in the U.S. and Canada, having Arthur downgraded to post-tropical storm status allows recovery to begin even as Japan and eastern Asia ramp up their cyclone defenses. Among the damages were flooded homes and businesses, toppled trees, power outages, and in North Carolina part of the road connecting Hatteras Island to the mainland was damaged but is in the process of being repaired. Among the most significant impacts of the storm were multiple reschedulings of events planned for the U.S. Independence Day holiday weekend. Several fireworks celebrations and concerts were rescheduled along the eastern seaboard. With most of the damage from Arthur occurring over a holiday weekend, though, damage estimates have not yet been calculated.

As tropical cyclones go, the U.S. and Canada seem to have avoided significant damage from the downgraded Arthur, and though Japan and South Korea are threatened, they are likely to be but slightly affected by the new tropical Typhoon Neoguri. Hurricane season has begun but hopefully will not produce the same level of devastating storms as have been seen in recent years.