Wyoming Town for Sale for $1.5 Million 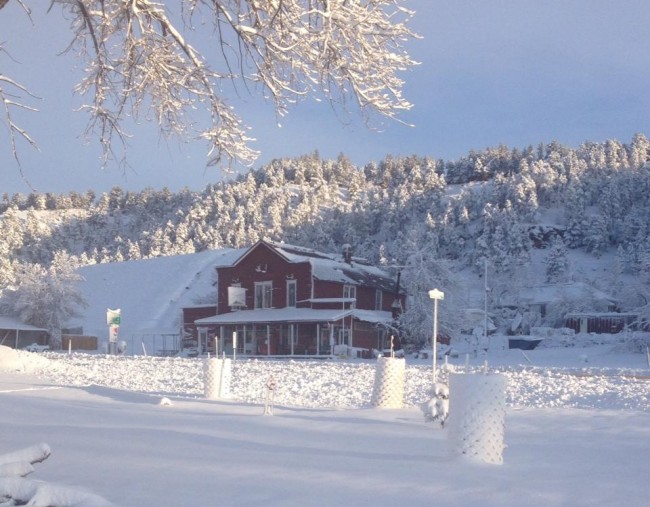 The entire town of Aladdin, Wyoming is on sale for $1.5 million. The sale will include 30 acres and 15 buildings.

In 1986, Rick and Judy Brengle purchased Aladdin. Their kids had gone to college and the couple didn’t know how to spend their free time, so they bought a town. However, they have decided it is time to semi-retire and let someone younger manage the town. The Brengles own property in South Dakota as well. They also operate a store there.  Judy Brengle has spent the last 28 years working seven days a week running Aladdin, ordering clothes, doing inventory, sorting mail, and selling beer and cigarettes. In this time, she has also held the position of Mayor for the town, police chief and postmistress among other titles. Although the Brengles have received some offers, no prospective buyer has been able to invest the same amount of time into the historic town.

The town was named after the hero of the Arabian Nights folktale who begins entrenched in poverty and ends up striking it rich. The 200 coal miners who settled in Aladdin, Wyoming in 1894 had similar ambitions. Settlers encountered coal close by in 1882, and began to transport it to trains located in Belle Fourche in South Dakota, eventually bound for the Black Hills, and the gold mines there. In 1889, a direct rail line was laid which went directly to South Dakota by the Wyoming & Missouri River Railroad from the area that would become Aladdin. The railroad’s president at that time was Mahlon Kemmerer of Pennsylvania, who designed the town for the coal miners. However, by 1910 coal production had slowed so drastically that there was only a need for a single trip from the town as opposed to the five trips per week which were customary up until that point. In 1922, the mines and railroad were sold and by 1928 the train stopped running altogether. Gradually, the number of residents dwindled to just 15. Now the entire town of Aladdin, Wyoming is on sale for $1.5 million.

Three similar coal-mining towns in the area ended up as ghost towns. However, the general store helped Aladdin avoid the same status.

There are 15 buildings for sale, including a house, bar, trailer park and post office. The best part of the offer, however, is the two-story general store, which is one of the five oldest in the Equality State. Since it was built in 1896, the general store, originally called Wyoming Mercantile, has served at various times as a general store, barbershop, depot, freight office, gas station, saloon, stage station, and telephone office. While its purpose has evolved throughout the years, little of the physical attributes have changed except for a new roof the Brengles had installed. The interior woodwork, cabinetry, windows and roll-top storage bins behind the counter are all original. Even the peeling wallpaper in the attic dates back 118 years. The store is still heated by an old-fashioned pot-bellied stove and has never had running water. Instead, there are two functional outhouses.

Currently, the general store sells an assortment of goods including antiques, art, beer, fishing supplies, groceries and hardware. Even though there are only 15 inhabitants, the general store gets plenty of business. Tourists come to Aladdin to learn about the coal mines, people from neighboring towns in South Dakota drive down on Sunday afternoons just for leisure, and, in August, there is the annual Sturgis Motorcycle Rally that brings thousands of bikers to Aladdin where drinking in public is still legal.

Aladdin is not the only Equality State town to be sold. Last year, Buford was sold for $900,000 and was renamed by its new owner to PhinDeli Town after the brand of Vietnamese coffee sold there.

When Aladdin, Wyoming is sold for $1.5 million, the Brengles plan to stay living in the town on the ranch that they own. They have grandchildren who will continue to tend the store and post office indefinitely. The Brengles hope that the new owners will not drastically change Aladdin.