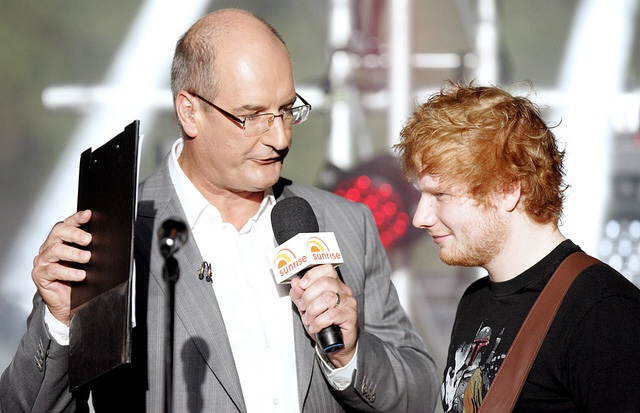 Ed Sheeran assisted actress Courtney Cox with her ALS Ice Bucket Challenge and it is all on video. The ALS Ice Bucket Challenge is still apparently the latest viral sensation on the internet today. Millions of people have posted videos dousing  themselves with buckets of ice water in order to raise money and awareness for Amyotrophic Lateral Sclerosis.

ALS is more commonly known as Lou Gehrig’s Disease. The degenerative disease slowly paralyses the infected individual by disabling the ability of nerve cells and brain neurons to work properly. People with the fatal illness typically live another two-five years after the initial diagnosis and there is no cure. Much of the recent success in raising money and awareness towards ALS research has been fueled by the large amount of celebrities who have elected to participate in the Ice Bucket Challenge.

The video, which can be seen on the YouTube website, shows the English singer dumping a bucket of ice water over the actresses’ head, while she sits poolside. Following the small bucket dumped on her by Sheeran, is a larger bucket that is dumped on Cox by two other men.

For those unfamiliar with the rules of the Ice Bucket Challenge, individuals are nominated by their friends or family and must either donate $100 to ALS or upload a video pouring the ice-cold bucket of water on themselves within 24 hours. Most celebrities make donations as well as post videos completing the challenge and nominate others. Cox was nominated by her former Friends co-star, Jennifer Aniston on Aug 24. Just as in their hit sitcom the two are real life best friends.

Cox decided to nominate her fiancé, Johnny McDaid, actress Isla Fisher, and Gary Lightbody. Lightbody is the lead singer of the rock band, Snow Patrol, while Cox’s fiancé sings background vocals and is a musician in the band. Fisher played the character Myrtle Wilson, starring alongside Leonardo DiCaprio in 2013’s The Great Gatsby. She also had a recurring role during the fourth season of Arrested Development.

Although the pairing of Cox and Sheeran may seem odd, the eccentric singer is actually responsible for linking the actress with his pal McDaid. Apparently, the red-head is good friends with Cox and actually lived at the couple’s Malibu, California home rent free for a month. Despite initial shock from the public, Courtney Cox using Ed Sheeran’s assistance in her Ice Bucket Challenge Video is actually not random.

Sheeran was nominated for the Ice Bucket Challenge by singer Taylor Swift and completed it on Aug 18. Swift and Sheeran have been close friends for years and have collaborated on songs in the past. The 23-year-old became a crossover star after becoming the opening act on Swift’s The Red Tour.

On Sunday evening Sheeran took home the award for Best Male Video at the 2014 VMAs, for Sing. The soulful track features singer and producer Pharrell Williams. Aside from providing assistance in Courtney Cox’ Ice Bucket challenge, Sheeran has made a great deal of unexpected news in the past few days.

On Sunday’s VMA red carpet the singer admitted that he is learning how to “booty clap” for his upcoming Thinking Out Loud video. The singer also was reportedly called an “A–hole” by an angered Miley Cyrus. When Sheeran attempted to go accept his award, the Wrecking Ball singer allegedly mouthed the derogatory phrase or something similar towards him. Sheeran is a man of many trades and talents. Whether he is donating, dumping ice buckets for ALS or learning how to booty clap, he is sure to find his name floating around.