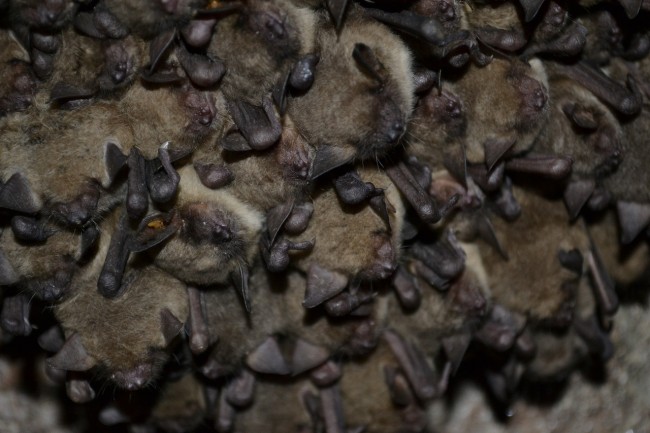 Despite the fear and trepidation bats may cause, the flying mammals bring benefits to humanity through a contrast that represents a fundamental human disconnect from nature. Bats pollinate and fertilize crops, binge on insects that spread disease, disperse seeds, and serve as the subjects of numerous scientific studies that are leading to advances in medicine, neurophysiology and military technology.

According to the U.S. Fish & Wildlife Service (USFWS), wild animals, like bats, can inspire exaggerated fears due to lack of knowledge and non-existent positive exposure. These fears are further validated by popular culture entertainment sensationalism, by news stories covering invasions of residential spaces by bats in urban areas, by the role of bats in the Ebola outbreak, and by government agencies’ very real and relevant public outreach and safety advice. It all boils down to a fundamental human fear of the unknown, and unknowns can be perceived as threats.

The more information provided about bats, the less threatening and more beneficial they appear. Research by chiropterologists, or scientists who study bats, is turning up information that can be used in medicine, neurophysiology and military defense.

Although bats are known to harbor a large number and variety of viruses, the fact that they do so offers scientists an invitation to further investigate the uniqueness of the Chiropteran immune system, which allows the known 1,200 bat species to harbor some 15 different families of viruses without succumbing to them. The resulting information could lead to life-saving vaccines or other treatments that currently do not exist.

Caution, not fear, is justified by the knowledge that bats harbor viruses and other diseases and can contribute to the transmission of viral diseases such as rabies, Marburg, Ebola, Hendra, Nipah. The Centers for Disease Control and Prevention (CDC) advises that although bats are capable of spreading disease to people, it is important to recognize the value of living safely with these animals.

Bats are a vital part of ecosystems worldwide, and the benefits they bring to humans balance out the cautions. Without the pollination, seed dispersal and fertilization contributions of bats, many rain forest and agricultural ecosystems would collapse. Certain agricultural crops including cashews, dates, avocados, peaches, bananas, mangoes, cloves, and figs rely on bats for pollination. Bat manure, or guano, is nitrogen-rich and represents a highly prized natural fertilizer. Bats eat mosquitoes and corn earworm moths in massive quantities each night, which help curb mosquito-borne diseases and protect agricultural crops with every feeding.

A recent study in neurophysiology, at Brown University, examined the way bats can zero in on a target, such as a small insect, in a crowded environment, such as an orchard. The findings may lead to a better understanding of how the human brain works and inspire new technology. Additional research on bat biological sonar, or echolocation, benefits the U.S. Navy’s navigation and defense technology. Further understanding of the frequencies bats emit during echolocation can be applied to military projects.

A useful strategy employed by USFWS rangers to reduce the public’s fear of nature, including bats, is to replace myth with fact. By acknowledging the public’s fear and following it with factual information, the rangers have successfully watched fears dissipate. By representing a source of balanced information, media outlets can help repair the human disconnect from nature by providing legitimate public safety cautions alongside facts about the benefits bats bring.