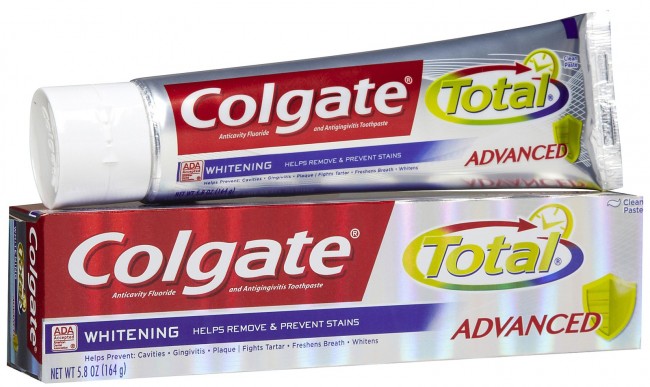 Cancer cell growth and development issues have been linked to the antibacterial agent,  Triclosan, an active ingredient in the popular American Dental Association-endorsed toothpaste, Colgate Total. Triclosan is being tested for safety in a variety of consumer products, including cutting boards, toys, and hand soap. The ingredient is widely used in products for the antibacterial qualities.

Consumer companies are phasing the ingredient out after receiving news that it could be causing cancer. In May, voters in Minnesota voted to ban the use of triclosan in most products, but researchers are concerned that the over-the-counter drug could be doing damage to millions, as they put the potentially harmful drug in their mouths on a daily basis.

Colgate does not plan to remove the cancer linked ingredient from Colgate Total brand toothpaste. In defending their decision they have cited the extensive testing which was done prior to the ingredient being approved as an over-the-counter drug in 1997. Recently, the reports Colgate is citing have come under attack, as Bloomberg News recently reported finding information in the
studies that show they were conducted by scientists that worked for Colgate. The FDA reportedly had concerns about triclosan when lab rats and mice showed adverse effects from the antibacterial agent.

However, the Colgate scientists who conducted the studies told the FDA the ingredient only carried a potential threat when consumed in large quantities. The reports, which were released under the Federal Open Information Act, show that triclosan caused fetal bone malformation in lab mice during the studies that were done in 1997. Additionally, recent studies of the antibacterial used in Colgate toothpaste found that the drug causes breast cancer in both human cells and in mice. The scientists who conducted the recent studies told Bloomberg News that the information released under FOIA caused concern about the process the FDA uses to approve ingredients for use in consumer products.

In 2003 the Center for Disease Control (CDC) conducted a study of 2,517 people, 75 percent of those tested had the over-the-counter drug in their urine. Colgate still maintains that the drug only causes adverse effects when consumed in large quantities and the spokesperson for Colgate, Thomas DiPiazza recently stated, “In the nearly 18 years that Colgate Total has been on the market in the U.S. there has been no signal of a safety issue from adverse-event reports.”

The findings on triclosan are not just causing concern over the drug itself, they are also raising concerns about the FDA process for approving over-the-counter drugs. People feel the FDA, an agency that is supposed to be committed to protecting consumers, should not depend on the findings of a company that is trying to obtain approval for a product for which they will be benefiting from monetarily, as there is a potential for a company’s scientists to be biased in their findings.

Research showing adverse effects from the drug was available to the FDA in 1997 when they approved the use of triclosan. However, the FDA did not demand that additional testing be done. The FDA instead approved the use of triclosan as an over-the-counter drug based solely on information from studies conducted by Colgate and a statement by the company, in which they stated the ingredient was only linked to cancer and other harmful effects when consumed in large quantities.