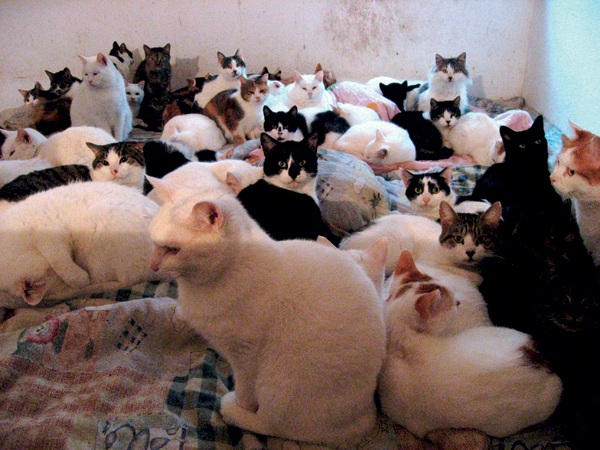 Another sad case of animal hoarding has occurred in Mt. Lebanon, Pennsylvania. A woman of undisclosed age and name has finally been evicted from her living quarters, leaving behind a multitude of cats in her wake. Close to 100 felines were discovered recently by a private contractor, who alerted authorities in the small town just less than 10 miles south of downtown Pittsburg.

Doing routine repairs, the cats were discovered after the tenant was evicted from her apartment. The cats were in all stages of life ranging from kittens to older cats and all had varying degrees of health. The local group, Animal Friends was called in to assist in the situation and found homes for several of the cats. Unfortunately, many more were simply euthanized after the discovery.

Neighbors in the area were relieved that the cat house was taken care of, but saddened at the fact of so many felines having to perish due to the neglect of the former tenant. Investigating sources are still looking into any ramifications and charges against the tenant that housed so many cats. It reportedly went on for years before the authorities acted upon the situation.

Hoarding is a disorder almost 700,000 to 1.4 million Americans have and are dealing with. It is a very complex disease that is still being viewed in different ways, from a psychological standpoint as well from medical and hereditary factors. Hoarding involves keeping stuff, abounding with trash, furniture, clothing, papers and much more, sometimes hoarding animals as well. It has also become a focus in televised accounts as an effort to help, but sadly bringing many private stories of struggles to light.

Hoarding has gone on for centuries, but in recent times with documented news stories and televised shows, the ailment often is revealed in plain view. The Learning Channel strives to enlighten the public of strange and weird behavior and has succeeded with its intriguing and unbelievable series of Hoarding and Hoarding: Buried Alive. All  the episodes are based on true stories of citizens living in filth, trash and clutter, simply clinging to some kind of hope to escape.

Hoarding stuff is one thing, but when it involves a multitude of animals it quickly becomes a situation to be dealt with. Counselors that have helped victims of the disorder are very skilled and diplomatic in their tactics. Using much patience to help remedy a living situation of a hoarder requires an ongoing effort to modify and make changes.

Hoarding stuff or animals usually results from a major life change. Often relating to trauma of an event or circumstance, each case is unique and should be considered. Depression, being ashamed or simply acting out in an effort of kindness, can have spiraling effects. Wanting to help a few cats and take them in can mean becoming a home to a multitude of furry creatures with all the trimmings.

In the case of the latest cat hoarder, she got out in the nick of time. Others have not been so lucky in the past, even succumbing to death and being nibbled upon by their furry friends.

This latest case of a cat hoarder set off clues with the acrid smell and overwhelming stench coming from the home, which alerted neighbors. he Mt. Lebanon are to be aware of the situation. The apartment may not be able to be saved for future use due to the damage of feces, fur and rotting cat bodies. The one human in charge may have escaped the ongoing façade, but the most of the felines involved have been put to death.

Another sad case of hoarding has one woman evicted but with many felines killed for simply being in the home. Hoarding is not always expected in a life plan, but there is hope to get out of the heap.

3 Responses to "Cat Hoarding Woman Evicted as Felines Are Killed"