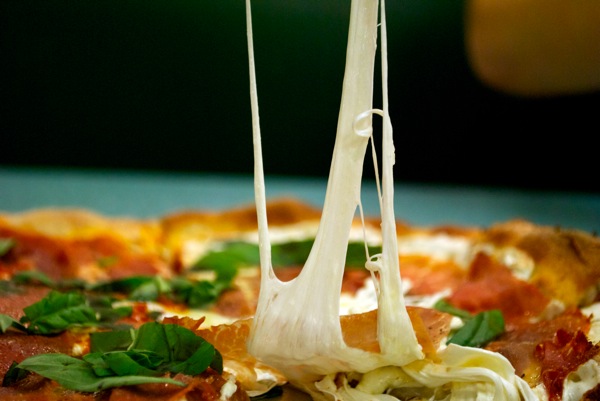 Cheese scientists have uncovered a long-standing mystery, much debated by pizza aficionados, as researchers at the University of Auckland in New Zealand announced their discovery of a piece of the secret to a perfect pie. Driven by curiosity about what chemical and physical properties of various cheeses account for differences in taste and appearance as they melt and bubble on the crust, materials engineering professor Bryony James and colleagues headed to the kitchen to discover the science of producing pizza perfection. Mozzarella and cheddar emerged as the winning combination giving insight to marketing efforts of commercial pizza chains on how to best achieve brand loyalty by meeting customer expectations of a superior product.

The study, published Aug. 21 in the Institute of Food Technologists (IFT) Journal of Food Science, graded samples of provolone, Edam, Gruyere, Emmental, Colby, cheddar and mozzarella on their melting properties, moisture, water and oil content, elasticity and microstructure. They used a custom-built high-resolution SLR camera and sophisticated imaging analysis software to reduce a subjective culinary experience to quantifiable algorithms. They examined color and uniformity for purposes of fair comparison of the blistering and browning effects exhibited by the various cheeses. Scientists spread the cheeses on a simple pizza crust and baked them without sauce or toppings to taint the results, documenting their experiment by creating intricate diagrams of their quest to discover the secret of perfection.

When the final timer rang, the food researchers compared the data and declared the winning pair. Although cheddar lacks the elasticity of mozzarella, the even golden brown coloring won it high marks on the customer satisfaction scale. The high fat and protein content in mozzarella activates the bubbling properties, which in turn contribute to its signature browning pattern. Higher salt content, smaller globules and decreased water mobility coupled with high transition temperatures and elasticity limited the size of the mozzarella blisters during baking. Therefore, the fusion of mozzarella and cheddar complement each cheese’s best features to forge a mouth-watering chemistry that appeals to pizza fans gracing pizzerias far and wide.

Colby, Edam, Gruyere, Emmental and provolone cheeses, which have significantly less elasticity than the mozzarella, displayed less blistering and browning. This is due to the ample quantity of free oil in these cheeses, which prevents evaporation and diminishes the browning effect. Manufacturers and restaurants wishing to cater to the gourmet pizza market by creating products using these luxurious cheeses can mix them with mozzarella to counteract an unsightly burning effect that comes between the customer and repeat business for their companies.

James anticipates that their scientific research discoveries on the properties of cheese could spur further discoveries in food science, revealing the secrets of microstructures and expanding the quest for culinary perfection to other essential elements of the pizza. The results of the cheese study did not take into account the subjective nature of human senses in identifying personal preferences in pizza selection. Rather, the scientists’ conclusions give pizza manufacturers and restaurant chains a key to unlocking the secrets of the perfect blend of ingredients that call their customers to return for more golden brown cheesy goodness again and again.