Cure Discovered for Hair Loss Due to Alopecia 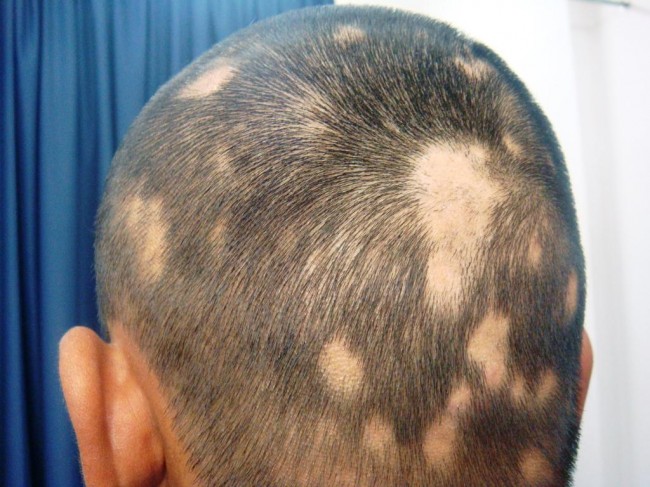 Alopecia is an autoimmune disorder that causes hair loss. This type of hair loss can occur in males or females and both the young and old. Autoimmune disorders are disorders that are due to one’s own immune system attacking one’s own cells. In the case of alopecia, the immune system attacks the air follicles, which are then damaged and do not grow hair. Alopecia has devastating effects on people, with women and younger people being especially hit hard by unexpected hair loss. Many people are not aware that someone has alopecia because people with this condition usually use wigs or employ some other kind of method to disguise it.

Hair loss due to alopecia can be very disturbing. Sometimes people lose their entire head of hair, or sometimes people lose only patches of hair. People can also lose hair on other parts of their body. The cause of hair loss with alopecia; that is, autoimmune attack, is different from hair loss that occurs in many men. Hair loss resulting in pattern baldness in males is due to hormones and genetics. There are various types of genetic conditions that are associated with baldness. The hormone that is most associated with baldness is testosterone. It is the high level of testosterone that is normal in males that produces baldness in conjunction with a genetic predisposition.

Whereas the cause of hair loss with alopecia has been studied and described previously, the recent study tested pharmacological intervention to reverse the hair loss effects of alopecia. In a previous study, a genome-wide association study was carried out and determined that the ligands for the NKG2D receptor, coded by the KLRK1 gene, had a cytotoxic affect on CDB+ and NKG2D+ T cells. T cells are immune system cells and these cytotoxic T cells were discovered to be the culprits that attacked the hair follicles in alopecia. It was learned that these T cells release a chemical that diffuses within the skin and this then triggers the immune system to attack the hair follicles. People without the autoimmune condition are all right because their immune system knows not to attack the hair cell follicles.

Given this knowledge, the recent study attempted to reverse the effects from this T cell attack by using an antibody blockade. In mice, an antibody-mediated blockage of IFN-gamma, IL-2 or IL15Rbeta prevented alopecia by reducing the accumulation of T cells in the skin.

The researchers continued the study by testing a drug with a similar action on humans. Ruxolitinib (brand name Jakafi) was used in a small human trial and was shown to not only prevent further hair loss but helped with hair regrowth. Ruxolitinib is a pharmacological inhibitor of Janus kinase (JAK). Alopecia patients showed regrowth of hair within five months of treatment with the JAK inhibitor.

The research was carried out at Columbia University with Angela Christiano as the lead researcher. The study report was published in Nature Medicine. The research could be considered a wonderful example of a successful translational research endeavor in that an underlying mechanism for this disease was discovered and an understanding of the molecular basis for the disease led to the discovery of a treatment.

4 Responses to "Cure Discovered for Hair Loss Due to Alopecia"