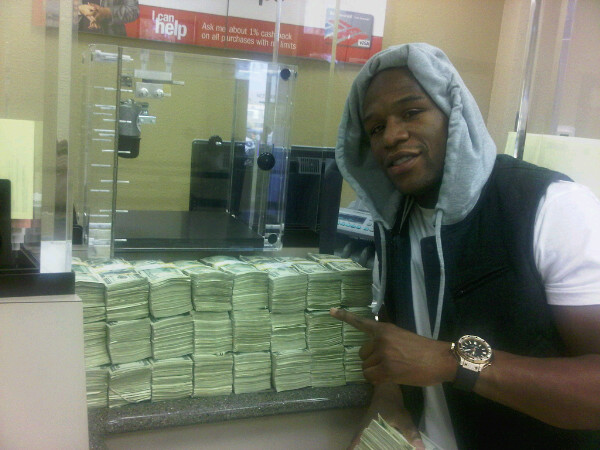 Floyd “Money” Mayweather has yet to accept, or deny, an illiteracy challenge presented to him by one time friend 50 Cent.  Mayweather, who recently took part in an interview seen on YouTube, discussed an array of topics. A few of which included his relevancy in the media, his longevity in the boxing world, his financial status, and the fact that he feels extremely blessed to have obtained all that he has over the years through what he calls, “an unbelievable talent.” Then, he goes on to talk about those he feels are irrelevant, namely music artists and rappers, who the outspoken boxer says, “come and go.”

Mayweather goes on to say in the brief interview with Mlive.com, that his own proof is in the pudding. “A lot of the time, you see many of these rap artists, they rap about certain things, a certain lifestyle, but I really live it. Every one of the homes that I have is paid for, every one of the cars I have is paid for, and I am a hundred-million-dollar man. I mean, this is the truth, it’s not a lie.” He sums up a mild disdain he has for certain rap artists that may not be as currently successful as himself by offering this, “I mean, if these people claim that they’re doing certain numbers and certain units, then we will see. My fight’s already been sold out.”

For those who may not know, or be unfamiliar with Mayweather’s resume, they should take a look at his bio, it really is quite impressive. Floyd Mayweather, Jr. (born Floyd Joy Sinclair on February 24, 1977), is a 10-time world champion boxer. He has won five division titles, and the lineal championship in four separate weight classes. He is also a two-time Ring magazine Fighter of the Year, a Boxing Writers Association of America Fighter of the Year, a winner of 5 ESPY awards for Best Fighter, and is widely considered by many boxing and sporting experts to be the best pound for pound boxer in the world. The highest paid athlete in the world, sports a 46-0 record, and is still currently undefeated.

Mayweather has the type of platform, and presence, that when he talks, people will listen.  Among some of the listeners, is one-time business partner and friend, 50 cent, who not only heard the interview, but took it as a direct jab, and sent out a quick response.

After posting his grievances with Money Mayweather on an Instagram video, 50 poked fun at his illiteracy issues before presenting the current champ with an offer, or challenge as it were.  The offer was, (and still is), $750,00.00 to his former ally’s charity of choice, if he can read an entire page from a Harry Potter book without stumbling.  (Mayweather did just that, more than once, while reading a promo only a few sentences long on morning radio show The Breakfast Club). Even Jimmy Kimmel got in on the action, presenting his own platform to broadcast the reading on his talk show.

For the most part though, (with the exception of posting over $70 million worth of paychecks on his Instagram account as a response to 50’s offer), Mayweather has been silent.  Twitter on the other hand, has not been. Every joke, name, and meme has been thrown Mayweather’s way in wake of The Breakfast Club interview, and 50’s recent challenge, and while a lot of fun and laughs have been had at the boxer’s expense, a much broader issue is beginning to take the forefront.  The issue of course, is literacy, and how according to the Pro Literacy Advocacy Group, almost 36 million American adults may be struggling to read a paragraph as well.

While it may be hard for somebody to feel a lot of sympathy for someone as wealthy as Mayweather, that does not change the fact that illiteracy in America is a problem.  Executive director of upstate New York’s LiteracyCNY, Marsha Tait, says the mass difficulty with reading among adults should be a nationwide issue, but often goes unrecognized. “It affects way more people than you might think,” she said. “We should learn to be more sensitive.”  Just a few of the statics found on websites like DoSomething.Org, or The Washington County Literacy Council.Org are baffling, to say the least.  Adult illiteracy in American society costs upwards of $240 billion every year in lost industrial productivity, unrealized tax revenues, welfare, poverty, crime, and socially related ills.

Money Mayweather’s Challenge may serve as an unofficial voice for almost 25 percent of the adult American population, (which is between 40 and 44 million), who function with illiteracy daily, according to the National Adult Literacy Survey.  Perhaps even more disheartening, are the two-thirds of students who cannot read effectively by the time they graduate 4th grade, dramatically increasing their chances of going to jail, as over 70 percent of American inmates cannot read above a 4th grade reading level.  A shocking one in every four children in America grow up without learning how to read.  With those types of numbers, it becomes more apparent that illiteracy, as a whole, is not limited to a specific race, region or economic class.  It is in fact, a widespread dilemma, that is felt and affects nearly every community.