By Michael Smith on August 29, 2014Comments Off on Infliction: Documentary Style Film has Great Story but Slow Pace 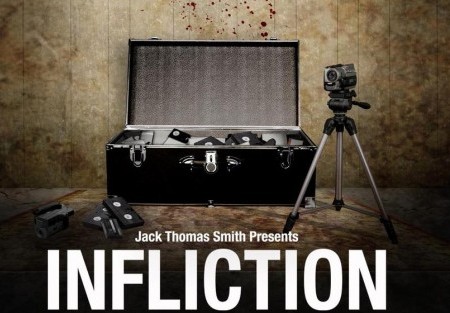 Infliction is the latest film by writer/director Jack Thomas Smith and the documentary style film does have a great story, but moves along at a slow pace. This is the director’s second feature, the first being his 2006 debut film Disorder and both features deal with the dark theme of murder. In this film, however, the emphasis is more on familial origins and interactions with all their direct and indirect consequences. Publicized as being the actual footage of two brothers and their murder spree it comes close to depicting that premise.

In that Smith has opted to go the “reality” route by using the “lost footage” type of delivery the film works well to a point. The main problem is that the film moves so slow in the first half of the movie it is hard to maintain interest in the proceedings. It is not until later that the reason behind this filmed multiple target killing trip is revealed. One thing that aids the director’s goal of presenting the feature as a documentary is the lack of a soundtrack which was done, no doubt, to heighten the feeling that the action on the screen was “real.”

The film starts with two brothers, John and Kenny Styles, filming outside a house where they are obviously watching the resident. There appears to be some glitch with the equipment and the two then apparently leave, review the footage and talk of replacing batteries.

After getting their equipment sorted, the brothers load up the SUV that they will be using in their killing road trip. John is the older brother and the instigator of this journey of murder. When Kenny loads up bags in the back of the vehicle he notices a number of mini-cams have been fixed to the windshield of the van and remarks that John is not “playing around.”

The older brother says that he was serious about capturing everything. Infliction does have a great story, but its slow pace makes it difficult for the viewer to keep interested enough to hold on for the documentary style film’s punch line or reveal. Until a third of the way through the film it is not apparent why the siblings are killing certain people.

It is only after John confronts a couple, who are tied to chairs with duct tape over their mouths, that the viewer finds out that these two brothers knew them years before. Later when John brazenly kidnaps a woman in broad daylight, this victim turns out to also be someone from the siblings past.

As things progress, it turns out that the two men have an older sister, named Andrea. The brothers have an obvious distrust of big sis and the reason for that is revealed later. The story behind the killing and the reason the brothers, specifically John, want everything to be filmed is that the whole thing is driven by their treatment at the hand of their parents as children.

While it is never said in the film, the two parents in question appear to be American versions of the U.K. couple Fred and Rosemary West. This infamous real life couple specialized in incest, rape, kidnapping and murder, not only of strangers, but of their own children. They lived in Gloucester, Gloucestershire and after being caught the local council demolished their house of horror.

In Infliction the couple are called Joe and Patti, and it appears that the only thing not on their menu was kidnapping. While it is tempting to go through the final acts of the film and point out the crimes committed this will not be done. Suffice to say that this documentary style film with its slow pace is worth sticking with for the great story overall.

The acting in the film sticks pretty faithfully to the idea that “real-life” dialogue between people is not smooth nor clever. The actors portraying the brothers do not spend a lot of time verbally communicating and when they do it is via short choppy sentences.

The cinematography is crystal clear, obviously shot in HD and the sound, while not of a cinematic quality, reflects the attempts to give the feature a more realistic “home video” type of sound. This works very well as does the simple FX used in the movie’s death scenes. Smith obviously realises that the biggest impacting factor of real violence is the shocking amount of blood that appears. He uses this to good effect and it adds to the scenario of serial killing by two men who have not done this sort of thing before.

Infliction may have a slow pace that, in places, annoys and distracts but overall this documentary style film has a great story. The reveal at the end where the viewer learns what these young men went through as children shocks more than the violence in the movie that precedes the climax. This second film shows that Smith is perfecting his ideas and has won the Genre Award for Best Story in a Feature Category at the Buffalo Niagara Film Festival in 2013. The film is available at most online retail outlets as well as video on demand.