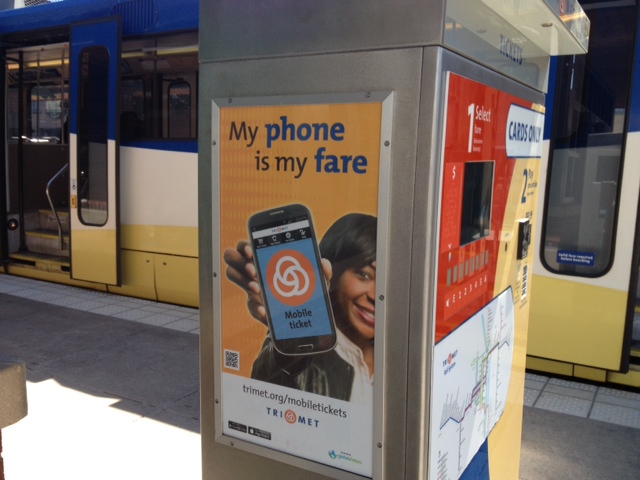 Mobile application software innovations are driving momentum in changing the way public transportation agencies collect fares in the 21st century. Transit systems around the country are jumping on the bandwagon in an effort to offer their riders convenient ways to pay their fares using smartphones and tablets with the goal of eliminating the traditional paper tickets and passes. However the smartphone ticket apps are just the tip of the iceberg in the future of the transportation industry’s vision for offering many flexible e-fare options for public transit riders across the nation.

In Portland, Oregon, TriMet director of revenue operations, Chris Tucker reports vast amount of favorable public feedback to their mobile ticketing app from all around the Metro transportation service area. As a champion of innovation and waste reduction in fare collection systems, Tucker expects that the possibilities offered by mobile application software will cut down on lost revenues from fare evasion and the overhead costs of maintaining ticket vending machines, printing paper tickets and tracking cash sales. He is committed to avoiding overreliance on any single technology platform to deliver e-fare ticketing systems to their riders.

TriMet joins transit agencies from Seattle’s Puget Sound region, the eTran in Elk Grove, California and the Rhode Island Public Transportation Authority in breaking new ground in fare collection by leveraging the power of innovative mobile application software to add value and convenience to their riders’ daily commutes. Nat Parker, CEO of GlobeSherpa, the Portland high-tech startup that won the bid to develop the future of TriMet’s e-fares adds that winning the contract led to similar offers in Phoenix and Los Angeles.

One plus to mobile fares is the potential to keep fare increases down due to decreased overhead costs since the agencies will not have to pay for ink, paper, printers and vending machine maintenance, which has been a costly logistical nightmare. GlobeSherpa’s processing fees are lower than the ticket vending machines, which often malfunction making it difficult for riders to pay their fares. This creates further expenditure as Tri-Met pours more money into fare inspection enforcement to stop the revenue loss from unpaid fares

Reusable e-fare systems offer the further advantage of never having to fiddle with exact change or carry cash on a crowded bus or train, although cash continues to be an acceptable alternative way to pay a fare. A frequent-rider program lures riders to take advantage of the digital fare options by comping the remainder of their rides when their daily fare expenditures reach the cost of a monthly pass before the end of the month.

As public transportation visionaries continue to innovate, they see the future expanding beyond the mobile fare software applications to widespread use of electronic smart cards or tap-and-pay apps to pay their fares virtually. Riders could manage their cards and accounts through their mobile devices or make deposits to their cards at local retailers. Tucker would like to develop a system that allows riders to link their bankcards and mobile devices to a secure account-based technology system using near-field communications and Bluetooth for both fare payment and fare inspection. The exponential rate at which technology develops in the 21st century certainly shows enormous potential for innovative mobile application software to transform the way the public interacts with transportation fare systems in their communities.