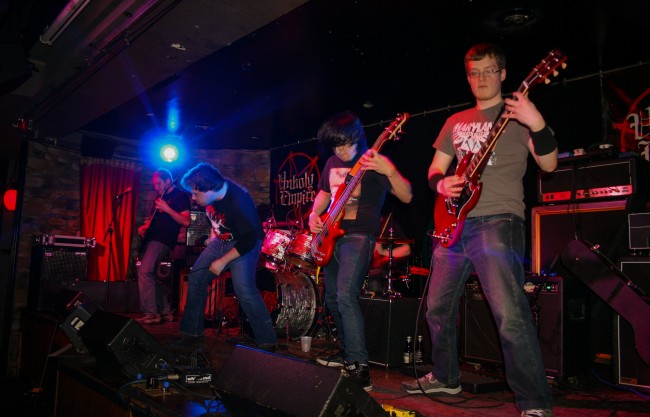 Hailing from the age-toughened streets of Chicago, the heavy metalers in Sacred Monster released their debut EP Knowledge in the spring of 2014. The EP only runs four tracks, but packs a surprisingly engaging classic metal punch, containing riffs that evoke many of the metal genre’s most beloved.

The EP kicks off with “Running the Risk,” a brisk track that the band structures well to showcase each member’s ability. For a genre that has been oversaturated with bands for years now, it is refreshing to hear a young metal band approaching their own songs through many elements of metal that began in the early to mid ‘80s.

Immediately, the listener can hear that the band has a penchant for the compositional tenacity of traditional metal. Within both their timbre and their structuring of songs, metal fans (particularly from older generations) will be pleasantly surprised by the lack of over-production. Dozens of contemporary metal and hardcore bands use the advancements of studio technology as a crutch to lean on in order to escape having to write intentional, pre-thought-out songs. Sacred Monster is no such band.

Guitarists Matthew Cohen and Robert Nubel never sit tight for long, as their dynamic work bounces off each other and proves to work well for the riffs they formulate. Leads and solos are aplenty, and “The Hound” represents the band’s apparent aim to be carving out a sweet spot for how their tempos complement their riffs. Sacred Monster plays mid-tempo metal well.

Clocking in at nearly six and a half minutes, “Midnight Sun” hears the band breaking their groovy melodic and bass lines down even further, giving guitarists Cohen and Nubel another chance to shine. The guitar work and solos on “Midnight Sun” are markedly impressive for the fact that they are tasteful, and do not sound to be thrown in simply for soloing’s sake.

Later on in “Midnight Sun,” the band picks the tempo up for more robust riffing, and drummer Ted Nubel plays to this change well. On Knowledge, the band’s tone of choice for stringed instruments gives off an almost buzz-saw quality (known to be more popular among European grindcore bands such as Rotten Sound and Exhale), and this timbre fits in noticeably well for the angle at which Sacred Monster are composing their songs.

“Forbidden Fruit” closes the EP, featuring the best execution of clean vocals on Knowledge. Each member of the band plays “Forbidden Fruit” with intentionality, making a powerful and coherent statement on the face of the EP. Sacred Monster pulls off what can often prove as difficult – composing metal songs with melody that are not oppressively busy.

A few areas in which Knowledge is lacking are production quality and the alignment of instrumentation. Sacred Monster has an acknowledgeable amount of grit in their music, but the clarity of instruments could stand to be increased on subsequent releases. The rhythm section of Sacred Monster is also faulty on Knowledge – not to their severe detriment, but drummer Nubel’s fills are more often than not shaky.

For a debut EP, Knowledge is a strong imprint of Sacred Monster’s abilities, for their fans and the Chicagoland metal scene. A number of the melodic phrasings dished up by the EP’s guitar work are surprisingly akin to Iron Maiden, one of the world’s most dearly loved and widely respected metal bands.

Provided they continue to flesh out their tendencies towards classic metal and composing authentic songs, Sacred Monster has a lot of potential for becoming one of the most appreciated bands in this niche of their metal scene. Download Knowledge through their Bandcamp, found below.