By Michael Smith on August 1, 2014Comments Off on Star Trek Convention Las Vegas 2014 Day One: Surreal and Giddy 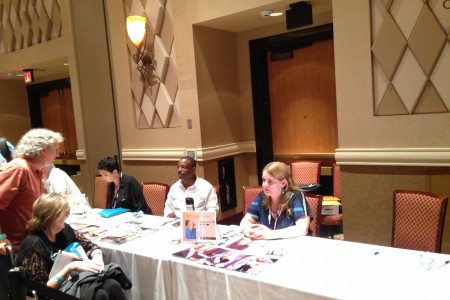 The 2014 Las Vegas Star Trek Convention, day one was a surreal and giddy experience. The actual act of being there with all those famous, and not so famous members of this mega popular verse, was mind blowing. Having missed a good portion of the first day, due to poor planning and major traffic issues in and around the town, some of the more legendary guests were missed on Thursday. Mainly the first Captain Kirk, William Shatner and Nichelle Nichols were both missed and David Warner was also apparently a “first day-er.”

Still, there were many other Trek stars, (see what we did there?) and from a broad spectrum of shows, films and roles. Literally the first person spied by this reporter was the legendary Sally Kellerman. The actress who starred as “Hot Lips” O’Houlihan in the 1970 film MASH, proving that she could do comedy quite well, has over 145 projects under her belt. Before she starred in the Robert Altman film as “Hot Lips,” she worked on the original 1966 television series of Star Trek on the Where No Man Has Gone Before episode as Dr. Elizabeth Dehner. By the late afternoon, there were not too many folks at her shared table with Catherine Hicks, however this did not seem to bother her too much.

Ms. Kellerman took a moment to allow herself to be fawned over by a reporter and even posed for a quick photo. Ms. Hicks was busy speaking to a couple of fans, she looks stunning by the way, and was obviously there because of her role in Star Trek IV: The Voyage Home where she played Gillian. Catherine was, seemingly, quite pleased to be at the event along with the two mysterious gentlemen who accompanied her and Ms. Kellerman at their table.

Spotting Sally Kellerman at the Star Trek 2014 Las Vegas Convention on day one was, as mentioned above, quite surreal and made for that sort of giddy fanboy inability to speak properly. What does one do when faced with a performer that they’ve admired since childhood? The answer to that is quite simply, “to come across as a simple minded idiot.” Although, to be fair, at least full sentences were used, even if they were not of the best English quality.

Going from fanboy spotting to just what one does when “following” an event, entering the huge area at the back of the Rio All Suite Hotel and Casino; the first thing to be done is to check in, as “press,” and collect the agenda of the four day event and then get the rules. Basically these tell the “press” what they can and cannot do. Essentially, these card carrying reporters are not allowed to be a nuisance and annoy either the guest stars or the paying guests.

The venue itself is spaced out over a number of rooms. The main auditorium, a group of smaller rooms, but not by a lot, where panels take place, and the huge “vendors” room. The latter room is where all things Star Trek can be purchased, including autographs for varying amounts of money. Fans can also buy “tickets” for later autographs. This was done for Simon Pegg and Karl Urban to name but two.

Along one wall were the combined signing might of Star Trek: The Next Generation. Marina Sirtis (Deanna Troi), Brent Spiner (Commander Data), Michael Dorn (Worf), LeVar Burton (Geordi La Forge), and Gates McFadden (Dr. Crusher). The queue for these stars fluctuated but overall stayed fairly busy. All nicely signed autographs and spoke to their fans.

Some, like Ms. Sirtis, spoke freely with all those who approached her. She had a chat with an English fan about “footie” aka, soccer this side of the pond, and who supported which team. For the record, Marina supports Spurs and the fan was a Liverpool United supporter. She told an amusing story about how she “forced” her younger brother to give up his team of choice, which was Arsenal, by destroying all his team paraphernalia. She won, after six months, and he then became a Spurs fan as well.

Note to Creation Enterprise: This was not learned as the result of an “on-site” interview, but from cheekily listening in on the conversation, aka, eavesdropping. It also emerged, by the same “trick” of listening in, that Ms. Sirtis, did autographs for free for vets. And not the kind that work on animals, but those who have served their country. How nice is that?

By the end of a very short first day, it was obvious that there was a good mix of “noobs,” like this reporter, who had never been to a Star Trek convention before, and some who were regulars. “Old hands” who were not doing their first rodeo at the 2014 Las Vegas Con. Overall, the atmosphere was friendly and excited. The surreal nature of suddenly coming face-to-face with icons of film and television, not to mention literature, was enough to make the most sombre individual giddy. Day two starts at 8:30 a.m. August 1 at the Rio All Suite Hotel and Casino.