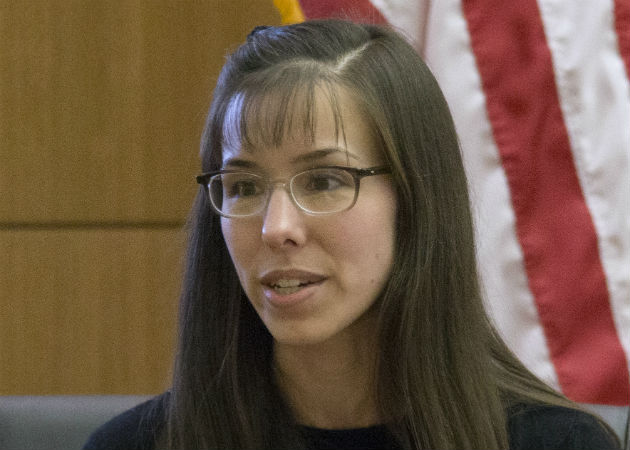 In the first day of the new Arias trial, 300 potential jurors reported to the courthouse and half have already been dismissed, as questioning highlighted their inability to be impartial in this case. Defense costs for the legal team assigned to Arias have already tagged Arizona taxpayers for more than $2.5 million and, as the new penalty trial begins, the price continues to climb.

Thirty-four year-old Arias admits to taking Alexander’s life, but testified at the first trial that the crime was committed in self-defense. The victim’s throat was slit and he was shot in the head. Crime scene photos show 29 stab wounds. After the sensational coverage of the 2013 trial by the media, the judge in the current proceedings has ruled that there will be no footage released until after the verdict. Highlights of the initial Arias trial included nude photos, a recording of a sex call between the defendant and the victim and graphic crime scene pictures.

Although Arias was convicted of murdering ex-boyfriend Travis Alexander in 2008, the jurors from the first trial were unable to agree on a sentence. The new Arias trial has a single purpose, to decide whether she will be sentenced to death or given a life sentence to be determined by the judge. Regardless of the hefty price tag, under Arizona law the prosecutors get one more chance to convince the jury to decide on the death penalty. The jury’s decision must be unanimous, or it is automatically taken off the table and the judge will decide whether Arias receives a life sentence or is eligible for parole after 25 years.

Travis Alexander’s sister, who cried at the end of the first Arias trial, was present during jury selection today. Alexander’s family has stated publicly that they would like Arias to receive the death penalty for her first-degree murder conviction. Arias originally stated that “she wanted the death penalty” but has since allegedly changed her mind.

Arias took the stand for several weeks in her 2013 trial and legal opinions were split over whether she helped or hurt her case. Despite millions of dollars in legal bills already accrued, Arias attempted to replace her lead defense attorney, Kirk Nurmi, both during and after her first trial, calling him “rude, curt and condescending” in a letter to the judge last October. When she was unsuccessful, Arias convinced the judge to allow her to defend herself, but recently reneged and agreed to a legal team of Nurmi and two women, Maria Delarosa and Jennifer Willmott. Arias’ new penalty trial is projected to last until the middle of December.

Four jurors on the original panel cast their votes to spare Arias’ life in the first trial. One of them, William Zervakos, reportedly told the defense team that “Arias is a terrible defendant.” Although her legal team has indicated a preference to keep her from the stand, Arias has proven that she can be headstrong. When her attorneys interviewed Zervako, he recommended “they keep Arias from testifying,” labeling her as “her own worst enemy.”

Sources close to Arias describe her as “scared and very nervous about her legal team.” Considering that the defense price tag has already exceeded the $2.5 million mark, it is way too late to her to stop the forward momentum of the penalty re-trial at this point. Jodi is in for the ride of her life — hopefully, she will have the sense to be quiet and hang on tight.