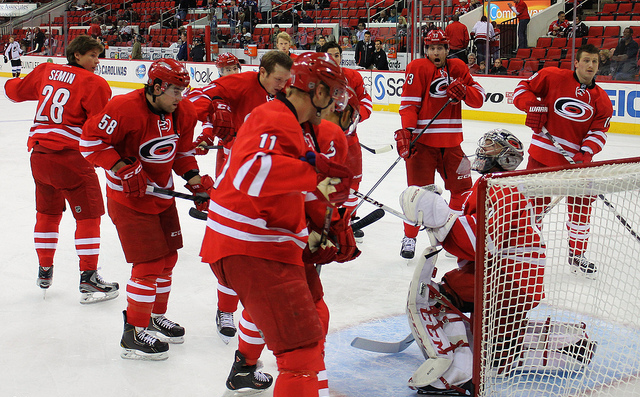 With less than a month before the start of hockey’s regular season, the Guardian Liberty Voice will be taking an in-depth look at the 30 organizations, one for each day. Today, 30 in 30 will look at the Carolina Hurricanes. The Hurricanes have all the talent in the world leading them exactly nowhere. Various issues over the past decade have prevented Carolina from making the playoffs with any sort of regularity, but the main issue that continues to rear its ugly head is the inconsistent play from Carolina’s star players.

Last Season – Last season, like many in Carolina, started with a lot of hope being whittled down due to injury after injury. Carolina Hurricanes’ Captain Eric Staal was still recovering from a vicious knee-on-knee collision that occurred in the 2013 World Championships. Both Cam Ward and Anton Khudobin suffered freak injuries in late October that kept them out for weeks. Alexander Semin was kept out for 12 games while recovering from a concussion. The injuries to many of the Hurricanes’ core players left it difficult for the team to find any consistency in their game.

The one bright spot in Carolina, who remained relatively (and surprisingly) injury-free, was dynamic winger Jeff Skinner. The winger surpassed the 30-goal plateau for the second time in his young career, and he showed some encouraging signs of improvement in his game. He was still able to generate his own offense when needed, but appeared more willing to dish the puck when a play wasn’t there. Probably the biggest change in his game was his spacial awareness. After being nailed by concussion after concussion in his early years, Skinner showed the ability to avoid the bone-crushing hits that would keep him out of the line-up. This meant more time playing for the Carolina Hurricanes and less time off the ice.

The Offseason – The Hurricanes threatened to clean house this offseason, but it was only the management that seemed to receive the axe. The general manager for many years, Jim Rutherford, stepped down from the position, allowing Ron Francis to take the helm. One of Francis’ first moves was firing head coach Kirk Muller and hiring Detroit assistant coach Bill Peters to lead the team. In addition, Carolina Hurricanes’ owner Peter Karmanos pledged to spend more time in Raleigh and take a more active role as owner of the team, after spending much of the past decade in Detroit.

In terms of player movement, there was little activity for the team on that front. The organization drafted defenseman Hayden Fleury in the first round of the 2014 NHL Entry draft, who could be an unheralded steal of a pick if his play in the World Junior Summer Development Camp was any indication of future success in the NHL. The Hurricanes addressed some of the minor holes in the lineup, grabbing Brad Malone and Jay McClement to create a bigger fourth line and signing Tim Gleason to play on the bottom pairing. However, due to assumed budgetary restraints, the Hurricanes failed to make a big splash in the offseason as they did over the past two years.

What to Watch for Next Season – Francis made it no secret that the future of many players on the team will depend on their performance in this upcoming season. Eric Staal, Jordan Staal, Alexander Semin, and Cam Ward, the core that Carolina has been running with over the past few seasons, has failed to accomplish much. If the team misses the playoffs this year, and if Francis can find takers for their massive contracts, it would not come as much surprise to see them all moved by year’s end.

Jiri Tlusty will be another player to closely watch. The Czech winger was able to put up 23 goals in 48 games during the lockout shortened season, but that season was bookended by seasons where the winger put up 17 goals in 79 games and 16 goals in 68 games. It appears that the production in the lockout year was a bit of a fluke, but he is on the final year of his current contract, so if there was ever a time to reproduce that success, this upcoming season would be it.

Finally, the battle between Cam Ward and Anton Khudobin as starter in the Carolina Hurricanes’ net should be an early season spectacle. Ward is the assumed starter, but that has more to do with his salary than his recent play on the ice. Peters has made it clear that the starting job is up for grabs, and that whoever wins it will be expected to play 60+ games this year. There does not appear to be a 1A/1B goalie situation in the cards. Both goaltenders have something to prove. Ward needs to prove his poor seasons were due to injury and not indicative of a permanent drop in play, while Khudobin needs to prove that he can produce the outstanding numbers he has throughout his career while playing a starter’s workload.

When it all comes down to it, Carolina simply needs to find their consistency on the ice. On paper, their forward corps and goaltending should be enough talent to compete for a wildcard spot, even with the questionable defense they are icing. However, a tough Metropolitan division was seemingly made even more difficult to play in this offseason, and the lack of any real moves being made to improve the team could leave the Carolina Hurricanes on the outside of the playoff bubble once again.

Join the Guardian Liberty Voice tomorrow, where 30 in 30 will examine the dynamic Chicago Blackhawks. Also check out yesterday’s team, the Calgary Flames.