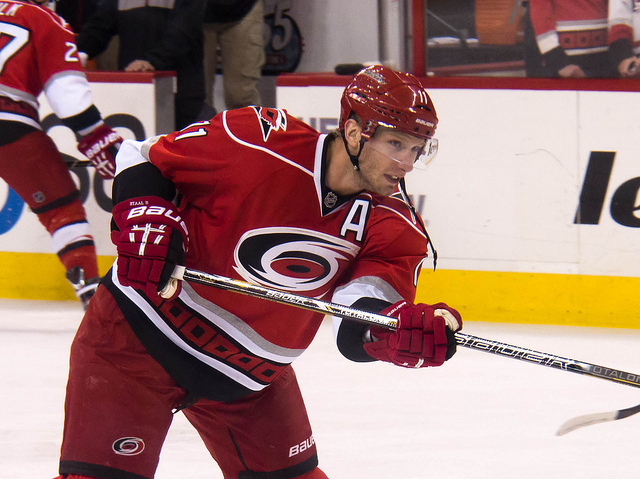 It was no secret that the Carolina Hurricanes were going to struggle to make the playoffs this year. The team finished out of the playoffs last year, the fifth year in a row they ended the season as such. Their offseason moves did nothing to impress, or really change the roster at all. It seemed the organization was banking most of their hope on a new coach and a healthier season for their star players. After Jordan Staal’s injury in last night’s preseason game against the Buffalo Sabres, it appears the Hurricanes season may be over before it even began.

Late in the final period of the game, Staal collided with Buffalo defenseman Josh Gorges while attempting to enter the offensive zone. What appeared to be an innocent play at first immediately took a turn for the worse, as Staal collapsed to the ice and laid there until play was stopped. He was escorted off the ice with the help of his teammates, unable to put any weight on his right leg, and immediately approached by the team trainers. Shortly after, he was in crutches as he hobbled his way to the Carolina Hurricanes locker room.

Though it has not been determined how long this injury will keep the young center out of the lineup, a broken leg typically leads to a six-to-eight week recovery time. This would mean the Carolina Hurricanes would be without the service of their second line center until December or January at the earliest.

“I’m concerned for sure. He’s a big piece of what we’re going to do moving forward,” new coach Bill Peters said before learning of the severity of the injury.

Carolina was already facing injury concerns when it came to their first line center, Jordan’s brother Eric. Eric Staal was a shell of himself last season, spending the early months recovering from a knee injury that occurred in the World Championships. He struggled to find his game, and finished with one of the worst seasons of his career. It seemed history would repeat itself after the Carolina Hurricanes announced that Eric was having surgery this offseason to repair a core muscle injury, but they assured their fans that he would be fully recovered by the time the season began.

Now, it may not matter. With Jordan’s leg injury, this would leave Elias Lindholm or Riley Nash as the second line center for the Hurricanes. Neither player appears ready to handle that role, especially the defensive responsibilities that Jordan also covered. Victor Rask has impressed Carolina management with his play in the Traverse City tournament and in these early preseason games, but even if he does make the team, he too is completely unprepared to handle a second line center role.

The silver lining for the Carolina Hurricanes, if there is one, is that this year’s draft boasts one of the best prospects to enter the draft in almost a decade. Connor McDavid has been pegged as the first overall pick in this year’s draft for years, and he would certainly help an organization that has struggled as much as the Hurricanes have of late. Though it might be too early to think of such things, with Jordan Staal’s injury, the Carolina Hurricanes will be hard-pressed to aim for much else.