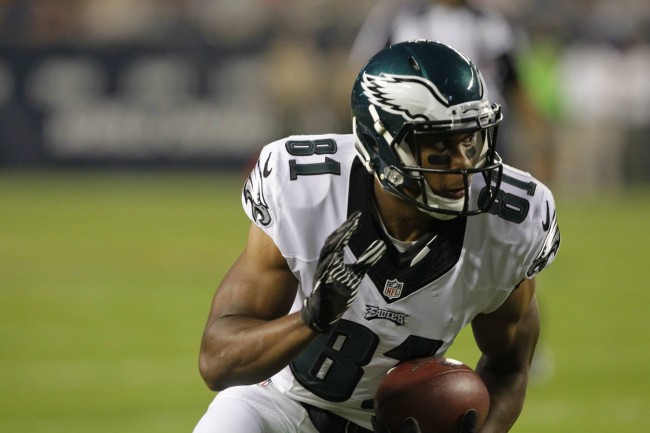 When it comes to finding deep sleepers in fantasy football, nobody knows anything. Spend hours ignoring friends and family or blowing valuable workplace time researching hidden gems and it is likely little will be achieved beyond future ridicule from fellow fantasy players. So why not turn to the wisdom of the masses? Crowdsourcing the collective research of fantasy players can provide a valuable report of whom to consider and who to pass over. It may also give definite proof that nobody knows anything for certain.

Here is an analysis of some of the top recent movers on the fantasy football Roster Trends board at CBS Sports.

With Philadelphia veteran WR’s Jeremy Maclin and Riley Cooper lined up on the outside, second-round pick Jordan Matthews is set to make an immediate impact in the slot for the Eagles. The 6’3″, 212 pound rookie out of Vanderbilt had an impressive college career with over 3700 receiving yards and 24 touchdowns against SEC competition. He was an Eagles’ camp standout and, despite a poor showing in his preseason debut against the Bears, Matthews led all wide receivers with 104-yards and no dropped passes in his second game against the Patriots. With DeSean Jackson gone, the Eagles have made Matthews their third option and the team is depending on him to help keep the offensive flying.

Jordan Matthews stock has risen eleven percent in the past week to 54 percent ownership among CBS Sports’ fantasy players.

Anthony Fasano will start the season as Kansas City’s top TE, but coming up fast is second-year man Travis Kelce. Both are coming off injuries; Fasano limited to only nine games, 200 hundred yards, and only 3 touchdowns in 2013, and Kelce missing his entire rookie season with a knee microfracture. Keeping tabs on his health is fantasy players’ main concern, but the former Cincinnati Bearcat has had two impressive touchdowns in preseason games and has been compared to Rob Gronkowski in his reach and athleticism. Fasano is entering his ninth season and has been a steady performer, but the new kid Kelce is set to take over starting duties sooner rather than later.

Travis Kelce’s stock has risen ten percent in the past week to 37 percent ownership.

Markus Wheaton is likely a name known to few outside of Pittsburgh Steelers’ fans and hardcore fantasy players, but that might change soon. A record-setter at Oregon State with 227 receptions, the second-year WR was a dud in his rookie season after suffering two finger injuries and a depth chart burial. However, 2014 finds Emmanuel Sanders catching passes from Peyton Manning and Wheaton has been given the start across from Antonio Brown as the Steelers’ number two receiver. Wheaton is playing in a spot formerly occupied by Sanders and Mike Wallace, which means he is being set up for long touchdowns. At 5’11” and 182 pounds, he will not intimidate physically, but his explosive ability makes him a likely target for Roethlisberger.

Of course, Crowdsourcing should only be trusted so far. For example, the masses may be wrong about Shonn Green. The RB is coming into his second year with the Titans after a disastrous first year, with only 295 yards rushing and four touchdowns in eleven games. He is also being chased by Bishop Sankey, the Titans’ 2014 second-round pick. The former Washington Husky is now reportedly second on a “running back by committee” depth chart that also includes former K.C. Chief Dexter McCluster. Green has also suffered a recent leg injury in training camp. Yet, somehow, fantasy football players have upped Green’s stock from 40 to 49 percent in the last week. Unlike other players, whose deep sleeper status has been earned through rising potential, Shonn Green is a deep sleeper because any significant production this year would be a tremendous surprise.

Shonn Green has seen his stock  inexplicably rise from 40 to 49 percent in the past week.

An unlikely sentiment in general, but Andrew Hawkins must love being in Cleveland. The former Bengal inked a $13.8 million dollar free agent deal, and then watched team number-one wide receive Josh Gordon get grounded for the year with a drug suspension. Now he and Austin Miles are the Browns’ main men. However, relying on Hawkins to produce fantasy points is a major risk. He is not exactly a cornerback intimidator at only 5’8″ and 180 pounds, and his career output has been weak: three seasons in the league and only 955 total receiving yards and four touchdowns, all four coming two seasons ago. He will also have to deal with the circus that is Hoyer versus Manziel. He also plays for the Cleveland Browns, which is a strike against him by itself. Put together, the crowd is only seeing the loss of Josh Gordon and not the questionable talent behind him.

Andrew Hawkins has seen his stock rise from 19 to 26 percent in the last week.

Left out of this fantasy football report is the board’s top riser, Detroit kicker Nate Freese. The former Boston College Eagle has seen his stock rocket 21 points since being named the Lions’ starter. Crowdsourcing the rookie is fine, and he qualifies for deep sleeper status because he is an unproven commodity in a kicker-friendly environment, but a different kicker can be selected by fantasy players each week with little to no difference. Players should remember: The impact that a kicker can have on a game, either in real life or in fantasy, is minimal compared to some of the other positions.