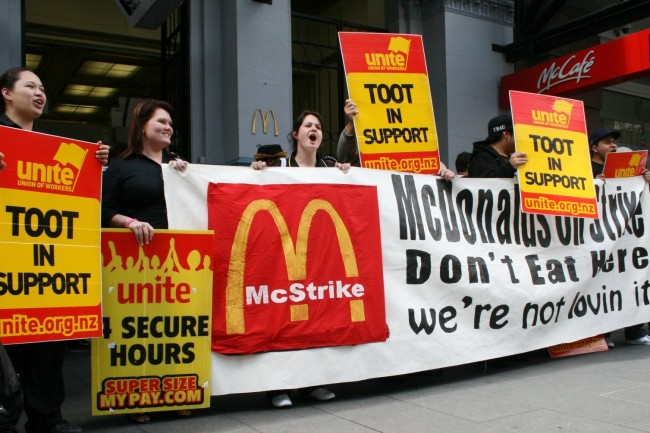 Strikes are once more being planned for this week in the fast food industry. Union organizers are again starting up the campaign to get the minimum wage for fast food employees up to $15 per hour. The strike will affect 150 cities across the country and is scheduled to occur on Thursday this week. This will be the latest effort put forth to increase the minimum wage in the fast food industry in the last two years.

As labor organizers continue the campaign to unionize the fast food industry, plans are being made for Thursday’s strike. These plans include acts of civil disobedience, sit-ins and walk outs all in an effort to further the push for a higher minimum wage. For this strike, even home health care aides are coming out in protest.

During the last strike only a limited number of restaurants were targeted. For much of that strike operations were barely disturbed as the strike was only for a short duration. The updated campaign is designed to showcase what the fast food industry workers have to deal with and why they need a raise.

Much of the focus is on the fact that many fast food workers make only slightly more than the federal minimum wage of $7.25 per hour. If a worker is given a full 40 hour week then their income for the year will only reach about $15,080. The labor organizers hope that with a strike planned people will understand that the fast food industry is currently underpaid.

Ever since the protests began back in 2012, the organizers have been continually pushing to keep the issues in the public spotlight. By planning this latest strike for a few days after Labor Day the hope is that people will start to really pay attention to their message. Organizers for the strike want people to hear their side of this debate and what they are fighting for.

Strike organizers are attempting to bring attention to low wages and the denial of overtime pay. The goal of a strike is to hold the fast food companies accountable for these actions. By including another group of workers in the strikes, the organizers are hoping that this will broaden their reach. They want people to understand that this is not just about unionizing the fast food industry. If even a portion of the home health care aides join in the protest, then people will know this is about fighting for a living wage.

If the strike goes as planned, there will be a possibility of civil disobedience. While the acts will be nonviolent, they can still lead to arrest. Some workers are willing to be arrested if it will make their voices heard. These workers want to be heard and the decision to participate in these acts of disobedience was agreed upon by a number of fast food workers at a rally that was held to plan the organizers’ next move.

Organizers hope that the planned fast food strike gets their message across. While Thursday is just one more planned strike in a list that will continue until changes are made, many hope that their voices will be heard. The message union organizers want to convey is that this strike is not just about the fast food industry. It is about getting workers paid a wage that they can support their families on. They want people to support the idea that all workers should be paid a living wage.