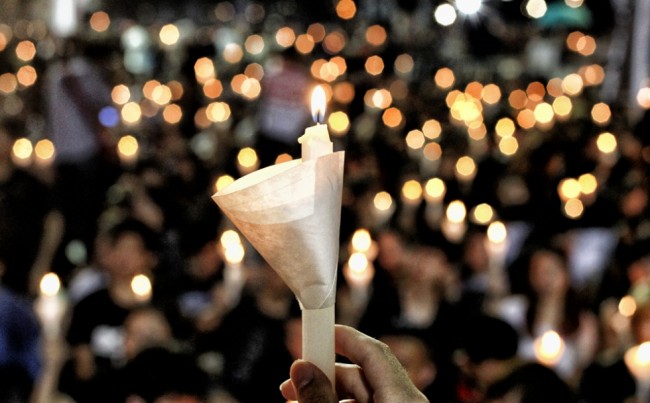 Protesters have demanded Hong Kong Chief Executive Leung Chun-ying’s resignation by midnight of Wednesday but that deadline has passed. Hong Kong’s chief executive, instead, demanded the protesters cease their campaign “immediately.” Meanwhile, the pro-democracy protests reached its sixth day with no advantages.

Tens of thousands of protesters have impeded the streets for a week now in the immalleable challenge to authority that China’s government in Hong Kong has not encountered since 1997 when Beijing took control of the former British colony. The Occupy Central civil disobedience movement joined protestors on Sunday and threatened to announce new civil disobedience plans if no action was taken.

Protesters demanded genuine democracy and for Leung’s resignation. Alex Chow, secretary general of the Hong Kong Federation of Students, declared that the number of protestors will increase if Leung Chun-ying did not come to Civic Square before midnight’s deadline which has passed. Chow organized the university class boycotts that incited the street protests. At midnight, protesters cheered. As the deadline passed, no immediate action was taken.

China’s National Day was the deadline for Leung to meet protestor’s demands for genuine democracy or else hand in his resignation. The Government canceled fireworks celebrating the holiday as larger crowds were expected to flood the streets Wednesday. The holiday celebrates the People’s Republic of China founded in 1949. This year, there were no fireworks and, on the holiday, no change.

In August, it was decided for China’s first direct election scheduled for 2012 that a pro-Beijing panel will screen all candidates. This decision was viewed as back pedaling on a promise that the chief executive will be chosen through “universal suffrage.” But on Tuesday, Leung Chun-ying had declared that Beijing would uphold its decision to sanction eligible candidates to lead the former British colony – which became part of China in 1997 – and does not believe the demonstration will overturn the ruling.

In a pointed address to the group, Leung requested Occupy Central founders to fulfill their promise to stop the campaign which he felt had gotten out of control. The protest is viewed as illegal and a threat to China’s government monopoly of power. Thus far, Hong Kong authorities have been handling the situation under the “one country, two systems” arrangement. This arrangement guaranteed the former British colony separate legal and economic systems and Western-style civil liberties after China took control in 1997.

Protestors have already endured police firing, tear gas, and a man driving his Mercedes-Benz through the crowd. Many of them are university and high school students completing homework assignments while occupying a six-lane highway. The freedom protestors declare they will not be intimidated by the police, tear gas or pepper spray as they await Leung’s resignation. They have used umbrellas to protect themselves from pepper spray while continuing to stand their ground.

British Prime Minister David Cameron plans to summon the Chinese ambassador to discuss the contention. The prime minister believes the people of Hong Kong should have a genuine right to choose their top leader. Others share the same sentiment and may advocate for the protestors in the days to come. As of now, Leung takes his own stand holding his position and upholding the government’s decision. The stand-off is not over, even though the deadline has passed with Hong Kong’s freedom fighters.