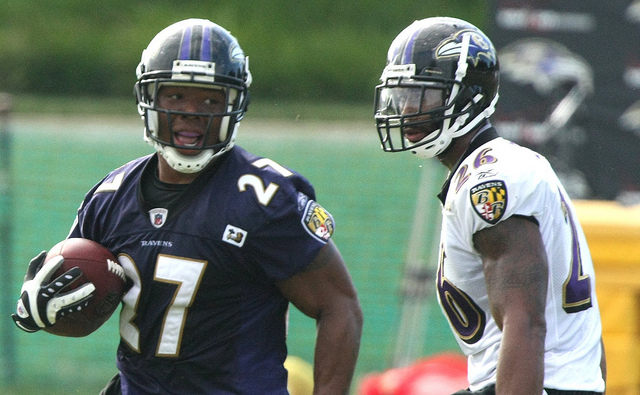 The near unanimous media condemnation of Ray Rice after the TMZ leak of the elevator video led to his release by the Baltimore Ravens and indefinite suspension by the NFL. While the NFL’s shifting narrative about the video unfolds and disgust is heaped upon Rice, little consideration seems to be given to the situation of Janay Rice. She is now the wife of a disgraced NFL player whose prospects for reaching the field again appear quite limited. She recently took to Instagram to lament the couple’s difficulties. The Instagram post by Janay Rice provides a window to view the complicated world of domestic abuse victims.

In her Instagram post on September 9, Ms. Rice criticized media condemnation of Ray Rice’s actions as attempts to “hurt us, embarrass us, make us feel alone, [and] take all happiness away.” For some, her post reflects her concern over the limited career prospects for her husband. No doubt her pain and sorrow rests, at least in part, on the likely loss of the lifestyle enjoyed through the substantial salary Rice previously earned. Ray Rice will likely not be able to play in the NFL again. He is only 27 years old, but has already carried the football over 6,000 yards in over 1,400 NFL rushing attempts. By the time he is able to even attempt a comeback, he will be pushing 30, which often is an age for declining production among NFL running backs. Given the negative publicity that would surround any team deciding to take a chance on him, the likelihood of a team voluntarily subjecting itself to that for an older back with substantial mileage on his legs is almost nil.

While much scorn has been heaped upon Ray Rice, and rightly so, little discussion centers on how best to help Janay Rice and those like her. Many see the situation as cut and dried, she should leave him and let him sort out his problems. Fortunately for Ray Rice, his wife appears to still love him and wishes to work through the difficulties and turmoil with him. This is common among many domestic abuse victims, while they may have fear for their safety, they still love the abuser. The tie to the abuser is even stronger when the victim is dependent on the abuser for support. In this case, Ray Rice will likely not be able to continue to provide the type of lifestyle the couple has thus far enjoyed.

If the NFL is truly concerned about the difficult circumstances of Ms. Rice and other domestic abuse victims like her, they should consider some kind of trust fund to assist with the support of abuse victims. The support need not be open-ended, but could allow for psychological counseling, college scholarships or jobs training. If the abuse victim sees that help is available to find an alternative path forward, then she will be more likely to report abuse to proper authorities and seek help. Merely suspending a player for a domestic abuse infraction allows the league to cut loose the entire situation while the abuse victim is left picking up the pieces of a broken life.

Although the NFL is not responsible for Ray Rice’s transgressions, the rough and tumble nature of the game along with the sense of invulnerability felt by many star players could be contributing factors for player spousal abuse. The situation of Janay Rice is illustrative of the complicated world of domestic abuse victims. The NFL should consider ways to help the victims of domestic abuse in order to improve the situation and show that the league is not only concerned with the public relations aspects of protecting the shield.