Lesotho Government On Verge of Collapse 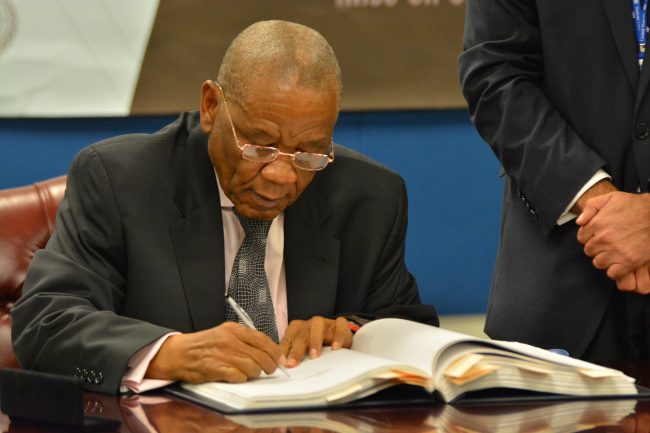 After an attempt by the military in Lesotho to seize government on Saturday, Prime Minister Thomas Thabane has fled to neighboring South Africa. Prime Minister claimed that the country’s military had attempted to overthrow the government by surrounding his official home and seizing various government buildings in Lesotho capital of Maseru and had even threatened to assassinate the prime minster. Just days later, an emergency meeting was held by South African President, Jacob Zuma where the Prime Minister Thomas Thabane met with his deputy and rival, Mothetjoa Metsing for the first time since the coup.

The unrest comes just months after Prime Minister Thabane suspended parliament, a highly unpopular move which was opposed by other coalition partners. Opposition leaders claimed that the move to suspend the parliament until February undermines the government, an allegation which was dismissed by Thabane. Since the last election two years ago, Lesotho has been run by a three-party coalition government. Following the military unrest, Thabane released a statement, saying that he is targeted due to his attempt to fight corruption in Lesotho.

Deputy Prime Minister Metsing denied allegations of a coup, instead stating that the clashes between the armed forces and Lesotho police was a mere misunderstanding. According to the spokesman for Lesotho military, Major Ntlele Ntoi, the military was responding to a threat, after suspecting that Lesotho police was providing political fanatics with weapons. Lesotho military has seized a variety of weapons from police forces in Lesotho, including AK-47 rifles, which were believed to be supplied to political fanatics. Political fanatics in Lesotho are young people, who were accused of being “on the verge of wreaking havoc” in the country. Major Ntoi told reporters that the weapons were prepared for use during a planned demonstration by Lesotho Congress for Democracy, a party led by Deputy Prime Minister Metsing.

The government spokesman for South Africa, Clayson Monyela, denounced the actions of Lesotho military, describing them as a clear attempt to overthrow the government. The principal analyst for the IHS Country Risk services, Robert Besseling, commented on the unfolding situation in Lesotho, stating that Deputy Prime Minister Metsing has assumed control over the government and is likely planning to form a new coalition and end the suspension of the parliament within the next month.

While Metsing has yet to officially announce the takeover of the government, activities carried out by Lesotho armed forces are similar to those of a coup d’etat. Peace returned to the streets on Sunday, with no military or police officers to be found. All of the police stations and courts were also closed. Lesotho has a population of two million and is one of the largest suppliers of water to South Africa.