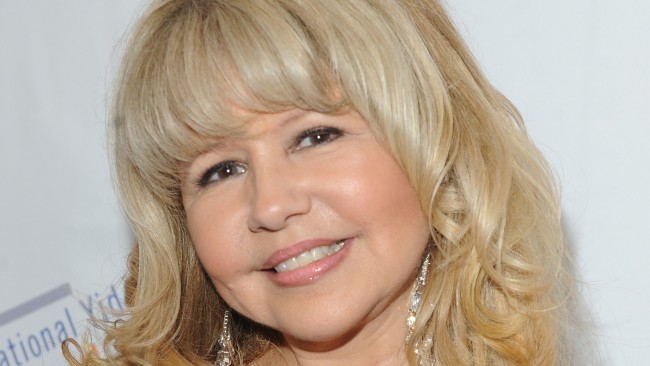 Pia Zadora, 60, remains in intensive condition at the University Medical Center hospital after suffering a head injury. The entertainer was thrown from a golf cart which was being driven by her son Jordan, 17, on Thursday at approximately 5:45 p.m. The accident occurred as Jordan turned left onto a street in Summerlin, the northwest Las Vegas community in which she makes her home.

According to Zadora’s rep, the actress will require surgery on her ankle as soon as she improves enough to undergo the procedure. Mike Jeffries, Zadora’s husband, told the Las Vegas Sun that his wife had bleeding on her brain as well as a compound fracture of her right ankle. He added that although she has been in and out of consciousness, her condition seems to be improving. Zadora was scheduled to sing with pianist Vinnie Falcone’s band at Piero’s Italian restaurant near the Las Vegas strip this weekend and the next, but has been forced to cancel those appearances.

The Las Vegas resident first appeared in Fiddler on the Roof on Broadway and the films Midgie Purvis and Santa Claus Conquers the Martians in the 1960s when she was still a child. In 1981, she starred in one of the last films made by Orson Welles – a highly criticized crime drama called Butterfly, whose plot concerned incest between father and daughter. She won a 1982 Golden Globe award for New Star of the Year in a Motion Picture for her work in that film as well as a Golden Raspberry Award for Worst Actress and Worst New Star.

The actress continued her career in the 1982 B-movie about women in prison called both Fake-Out and Nevada Heat, following that performance with a role in The Lonely Lady in 1938, for which she received another Razzie as Worst Actress of 1983.  Zadora starred in Voyage of the Rock Aliens and appeared in Hairspray. The Golden Raspberry Awards later named her the Worst New Star of the Decade for 1980-1989.

After being unable to make a career in film, she released several successful albums singing popular standards backed by an orchestra. Her success in that area allowed her to win respect from critics who had dismissed her as an actress. She recently has made appearances in a new musical review named “Pia Reloaded,” which celebrates her life and career and is directed by Jeff Kutash, award-winning producer.

After two marriages that ended in divorce, Zadora met current husband Jeffries, who is a detective with the Las Vegas Metropolitan Police Department, after she called to report a stalking incident.  They were married in 2005.  Last year, Zadora was ordered by a Las Vegas judge to undergo impulse-control and alcohol counseling after she used a hose to spray her teenage son in an effort to make him go to bed. She was arrested for coercion and domestic battery for the incident in which police were called to her home in the early morning hours, but had to call in the SWAT team after the family locked themselves inside of their home.