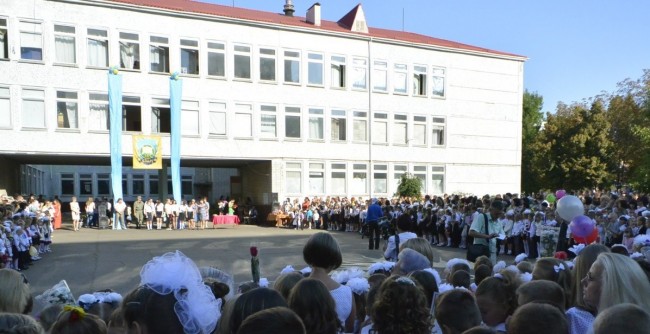 Russia and Ukraine’s schools are open for 2014, bring summer holidays to a close. The first of September heralds the opening of the school year in nations like Russia, Ukraine, Belarus, Kazakhstan, Moldova, Bulgaria, Georgia and many other parts of Eastern Europe and Central Asia. Uniquely, this day has several concurrent titles: 1 сентября (Sept. 1), День знаний (day of knowledge), and первый звонок (first bell). Teachers often use the “day of knowledge,” while students frequently use the “first bell” term.

The day usually begins, weather permitting, with an opening ceremony outside in the school’s courtyard. While proud parents are busy snapping photographs, school administrators greet the students and introduce the teachers. After introductions, students form a line behind their home room teacher for the coming school year. It is traditional for parents to attend much of the first day of school with their children. Most students have no need to commute, but some Moscow students were greeted in the Metro on Monday by representatives from “Moscow-24” television with flowers and gifts.

Prior to entering the school building, a traditional ceremony calls for a representative from the senior class (11th grade), to select one of the new first grade female students, and carry her on his shoulder around the assembled students as she rings the “first bell.” It is customary for boys to wear suits or uniforms, while girls wear a uniform of dark skirts and white blouses with white bows in their hair. 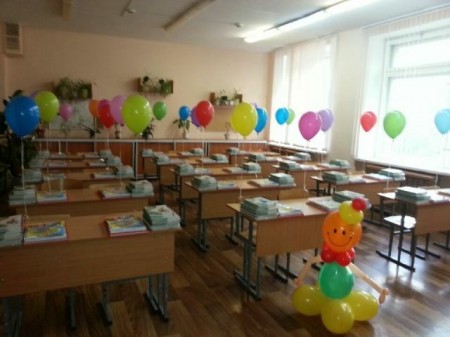 Once inside, the students find their names on wide desks, two students per desk, and the teachers outline the course of study for the year. Most countries in this part of the world have comprehensive unified exams at the end of each year, and so teachers use daily lessons to prepare students for those exams. It is tradition for students to bring a bouquet of flowers for their teacher on opening day.

Education in the eastern world is generally serious stuff, both to the educational community, and to the students and families. Boasting a 98 percent literacy rate, Russia’s educational success is thought to outpace the Western educational system even though students only attend through grade 11. Those 11 years are packed with core studies in science, mathematics, and languages.

In Ukraine, not all schools are open for the September start of studies. Some have been badly damaged by the fighting in eastern Ukraine, and there is no money for repairs. In some areas where the fighting continues to rage it is not safe for students to go to school.

The most common Russian name for school is школа, spoken as ”skola,” and there are popular songs about the first bell and return to school. These songs can be heard from each classroom on opening day. Another common name for some high schools is гимназия, pronounced as “gym-nahz-ium.” It is the same name as the English word, gymnasium, which in Latin denotes a school dedicated to serious academic pursuits. Not every student qualifies for such a school, and there is great competition among students who wish to attend these special institutions in their high school years.

While opportunities exist on a limited basis for sports and other extra activities, schools in the East are more oriented toward academics and the arts. Subjects such as music, acting, dance and theater are highlighted in contrast to American schools. Conversational and writing fluency in at least one foreign language is a graduation requirement, and some students master more than one, depending on their interests.

Educational delivery is based on neighborhood schooling, and thus the Western idea of school buses is an extreme rarity. As most housing in typical cities consists of high-rise apartments, a neighborhood school caters to the students who live in the buildings surrounding the school. Most students attend the same school from first grade to graduation.

The opening of Russia and Ukraine schools signals the arrival of another “day of knowledge” to the world, but as the Moscow Times noted a few days ago, one more recent event of historical significance has been overlooked due to  the fighting between Russia and Ukraine. It was 10 years ago, on the first day of September 2004, that Chechen terrorists took students hostage in the Beslan crisis.

One Response to "Russia and Ukraine Schools Open"