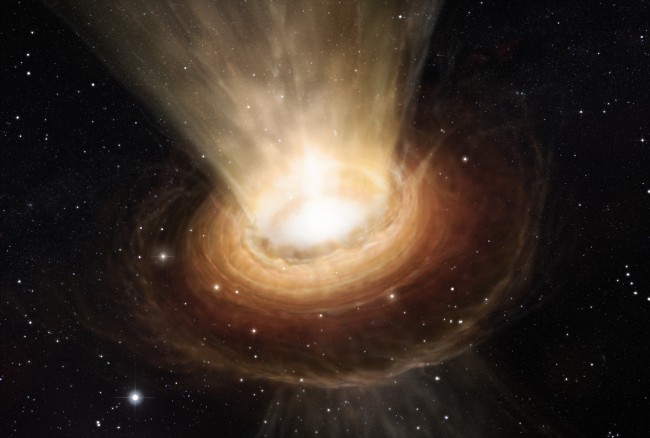 A scientist at the University of North Carolina believes the reason behind so much debate over the mysteries surrounding black holes is due to the fact that they do not exist. Professor Laura Mersini-Houghton had a paper printed up which contained approximate solutions in the journal Physics Letters B. The publication she wrote stated that it was impossible for black holes to exist. She declared that she even had the mathematical evidence to support her claims. If her assertions proved to be correct, they could end up forcing physicists to toss away their notions of how the universe started.

Mersini-Houghton explained that it was too incredible to believe that stars could collapse and produce a singularity. Scientists who believe that black holes exist theorize that stars that are bigger than the Sun eventually buckle under their own gravity and form black holes as they perish. The professor claimed that instead, when a star was expiring, it discharged a form of radiation identified as Hawking radiation, which has been predicted by Professor Stephen Hawking himself.

Astrophysicists have studied black holes for years and it had been widely assumed that when a star 20 times more enormous than the Earth’s Sun, or bigger, dies and collapses, it becomes compressed into a very small area known as the singularity, which is also tremendously dense. It is thought to be encircled by an event horizon, which is a section where the gravitational pull is so sturdy, light cannot even escape. It is basically considered a point of no return.

Professor Hawking first hypothesized back in the middle 1970’s that because of quantum effects occurring at the event horizon, radiation was released, which is now known as Hawking radiation. As time passes, losing such radiation can yank mass away, in a process called evaporation. However, Mersini-Houghton explained that with so much radiation lost from a star when it collapsed, there was no way possible for it to create a black hole.

Professor Mersini-Houghton stated that she clearly and effectually resolved Einstein’s Theory of Relativity with quantum mechanics. Even though the two have actually never really been considered at odds on a great scale, physicists had previously been incapable of cohesively merging the two. In terms of relativity, the development of black holes is able to be predicted. She explained that black holes did not exist.

However, in quantum mechanics, the uncertainty principle does not allow scientists to figure out exactly where one is located. It is fairly possible to come close, but not precisely where the black hole is thought to be. This is only one of numerous ways in which Einstein’s classical field theory and quantum theory fail to line up together when it comes to agreement on black holes.

Mersini-Houghton noted that physicists had been attempting to merge Einstein’s theory of gravity with the theory of quantum mechanics for decades and had always failed. She added that her scenario was able to finally bring the two principles together in harmony.

However, not everybody has jumped on board with Professor Mersini-Houghton’s deductions and proclamation that black hoes do not exist. Professor William Unruh, who works as a theoretical physicist at the University of British Columbia, was quick to point out what he considers to be “fatal flaws” in Mersini-Houghton’s argument.

Professor Unruh declared that Mersini-Houghton’s paper was “nonsense.” He explained that such attempts to show that black holes have never formed go back a long way in history and this was only the latest. They all get the wrong idea about Hawking radiation and assume that matter reacts in ways which are totally unbelievable, he replied.

This is where the density of energy becomes larger. Obvious calculations of the energy density near to the horizon have shown it to be very small instead of big. Such calculations were previously done in the 1970’s. However, Professor Mersini-Houghton fully believes her own claims that black holes do not exist.

5 Responses to "Scientist Believes Black Holes Do Not Exist"