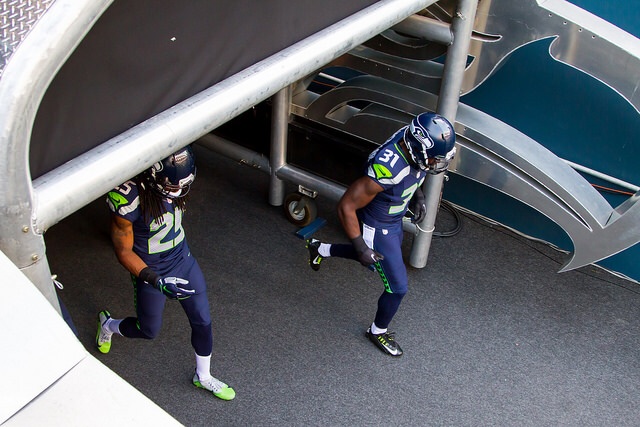 The Seattle Seahawks are back and show no signs of slowing down.  The NFL made its return to national television for the opening of the 2014 season on Thursday night. In what many fans and experts believed would be a very competitive matchup, the Green Bay Packers were defeated by  the  Seahawks 36-16. The lop sided affair showed spectators exactly why the defending champions have a fair shot at repeating this season. Seattle reminded football enthusiasts that it still boast the league’s most dominant defense, a talented but efficient young quarterback in Russell Wilson, and a relentless running game, led by Marshawn Lynch. These ingredients were all but essential in their crushing home victory.

During the pre game festivities, the Seahawks unveiled their 2013 Super Bowl Championship banner, the first in franchise history. Afterwards a relatively quiet first quarter saw Green Bay take a 7-3 lead on a 2 yard run from John Kuhn. The goal line fullback fought his way through a swamp of  players and stretched  for the touchdown. However, the Packers would struggle to move the ball down field the rest of the half.

After managing just a field goal through the first quarter, the Seahawks bounced back to score two touchdowns in the second quarter. The first score came on a brilliant play call. Wilson faked a read option, then fired a pass to a wide open Ricardo Lockette. The wide receiver broke free from Packers safety, Ha Ha Clinton-Dix (what a name), and finished off the 33 yard reception. Green Bay then failed to reach the end zone after a 12 play 79 yard drive ended in a 23 yard field goal. Packers quarterback, Aaron Rodgers was visibly frustrated when he overthrew high to his intended target, receiver Jordy Nelson in the back of the end zone.

Wilson would then hand the keys over to the Seahawks running attack. Lynch scored on a 9 yard scamper up the middle, after a 21 yard burst brought Seattle to the 20 yard line. Lynch finished with a marvelous fantasy football stat line of 110 rushing  yards on 20 carries, two touchdowns, and even registered a 14 yard reception on a screen play. Beast mode was in full effect on Thursday night, as the Packers defensive backs realized that solo tackles do not work versus the shifty and physical four time Pro Bowler. While Green Bay defenders did manage to bring down the 5’11” 215 pound skittles eating machine with gang tackling, those opportunities were few and far between.

When Lynch was not pounding his way through traffic, Wilson was handing off jet sweeps to the explosive Percy Harvin. The dynamic athlete missed nearly all of the 2013 regular season with a hip injury. However, he was back last night with  a vengeance. Harvin caught all seven of his targets for 59 yards, including a 33 yard reception. The speedy wide receiver also darted out of the backfield quite a few times, looking like a running back. His 44 yards rushing on just four carries and great blocking upfront,  kept the Packers defense completely off-balance. Wilson finished 19-28 for 191 yards and two touchdowns.  His quarterback rating for the game was 110.9.

Wilson’s counterpart, Aaron Rodgers, was not nearly as sharp. Coming into the game, many expected Rodgers to show the dynamic play that the Packers greatly missed last season. Rodgers missed seven games last year with a broken collarbone. However, the 2011 MVP did not have the ball for much of the game. The Packers offensive game plan was to run a hurry up offense. Offensive coordinator Tom Clements wanted to counter Seattle’s highly productive first unit defense by keeping them on the field for entire drives. The Seahawks main unit typically plays about 65 percent of the defensive snaps. That task proved nearly impossible due to heavy pressure on Aaron Rodgers throughout the game and an incredibly loud Qwest Field.

Rodgers at his best is as good as they come in and out of the pocket. However, the Seahawks defense simply did not give up many big plays and Rodgers was forced to throw mainly short yardage passes. Despite going 23-33 Rodgers managed just 189 yards and one touchdown. The 30-year old veteran did not even come remotely close to throwing at Seahawks cornerback Richard Sherman. Sherman shadowed the Packers number three wideout, Jarrett Boykin, on the right side of the field for much of the game.

Unfortunately, Rodgers still made two crucial mistakes on consecutive drives to open up the second half. Following a Seahawks punt on their opening drive, with Green Bay trailing 17-10, Rodgers led Nelson too far on a slant route. Instead of continuing to run for what was arguably a catchable pass, he elected too fully extend his arms to attempt the catch. The ball was subsequently deflected off Nelson’s fingers and caught by Seahawks cornerback, Byron Maxwell,  after a slight collision between the two players. Nelson was the lone bright-spot for the Packers. He hauled in nine passes for 83 yards and routinely beat Maxwell one on one, prior to the interception. The play resulted in a 20 yard field goal by Steven Hauschka.

Nonetheless, the biggest turning point in the game came when Rodgers was sacked at the Green Bay three yard line, on another first and 10 play. This time Rodgers fumbled the ball and it rolled into the end zone. Packers right tackle, Derek Sherod, recovered the fumble in the end zone and was touched down for a safety. The momentum shifting play was eventually followed by another three yard touchdown run from Lynch.

Trailing 29-10, the game was all but over by the time Rodgers led Green Bay downfield on an 82 yard touchdown drive. The drive culminated with a three yard pass to wide receiver, Randall Cobb. Cobb caught six passes for 58 yards, including the lone second half score for the Packers. Despite the two painful mistakes by Rodgers, much credit must be given to the Seahawks defense.

The pass defense was stellar as usual, but much of the reason why Rodgers was under such heavy pressure was due to the lack of a consistent run game. 2013 Offensive Rookie of the Year, Eddie Lacy was ineffective. The running back rushed for just 34 yards, on 12 carries. The 2.8 ypc was not what the Packers needed to establish their running game. 22 of Lacy’s yards came on runs of 15 and 6 during the game’s opening drive.

Lacy was forced to run outside and did not have the speed to turn the corner or outrun linebackers and defensive backs of the Seahawks. Even worse news for the Packers was the fact that Lacy suffered a concussion late in the game. In a post game interview, Packers head coach Mike McCarthy revealed Lacy’s status. The sophomore running back will now need to undergo the NFL’s concussion protocol. Second string running back James Starks ran well when he was given an opportunity, with 37 yards on 7 carries. But much of those runs came far too late in the contest.

After the Green Bay score, Wilson put the Packers out of their misery when he picked apart their defense for a 15 yard touchdown to fullback Derrick Coleman. The Thursday night football massacre was not expected, but certainly an exquisite win for the Seahawks. The Packers will look to even their record at home in week two against the Jets. Meanwhile, the Seahawks will be on the road to face the San Diego Chargers. Football fans can only hope that more of Sunday’s week one marquee match ups do not end up in blowouts like this one.