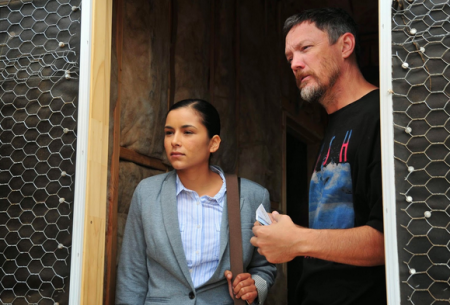 In The Bridge: Beholder Fausto has Sebastian’s addicted daughter and he makes a video with the young woman who is obviously going through withdrawal. At the conclusion of the footage Fausto tells Sebastian to, “tell them to stop looking for me.” He then tells the girl’s father that he will blow her brains out if he does not do as instructed. The CIA and the DEA gang up on Detective Cross and take the Eleanor Nacht investigation away from her and the creepy CIA agent asks, in a round about way, about Eleanor’s ledger.

Daniel Frye and Adrianna attend Agent McKenzie’s funeral and speak to his wife. After learning about the dead agent’s “special project” Frye and his partner go and steal the files McKenzie was keeping before the DEA can get their hands on them. Marco tells Sonya that he needs to come clean about the shooting in the hotel room. He asks her to come with him but before making the request Ruiz tells Cross that he knows where Fausto is.

Sebastian receives the video on his phone and lies to his wife when she asks what is going on. Ruiz and Sonya go to the prosecutor and the Juarez detective says he will deliver Fausto. Steven and Eva stake out Captain Robles’ house. The two find out that Robles has children and it disturbs Eva. She asks that the beard, that Steven says gives him “special powers,” be removed so she can look at his face.

Sonya visits Hank and he wakes up. The wounded man tells Cross that he took Eleanor’s ledger and where to find it. Fausto learns of a nearby quinceañera and the drug lord visits and asks if he and his men might join the festivities. Cross finds the ledger and goes through it finding the lock of hair in Eleanor’s book. In The Bridge: Beholder Ruiz continues to move resolutely forward to capture Fausto and Sonya gets closer to her goal of connecting Nacht to the teenage boy’s murder.

After going through the ledger, she asks Detective Cooper to bring Nacht to an interrogation room so she can question the professional killer. “Coop” reminds her that the DEA and the CIA have said that she is not allowed to talk to the woman. The two women talk and Eleanor explains that she does not work for Fausto. Nacht learns that Cross has the ledger and she tells the detective to be careful. She also reveals that her father raped her when she was a child. After this revelation, the DEA agent comes in to get Sonya out.

The prosecutor arranges for the Marines to help Ruiz to go after Fausto. The commander asks Marco where Galvan is and the detective says the deal made was not for him to give him up but for the drug lord’s arrest by Ruiz. Eva tells Steven, as she cuts off his beard, that she wants to “stop living in the past.” When she learned that Robles had children, it put her off the idea of revenge and she does not want to cross that bridge. Steven is not deterred and says that the corrupt captain must pay for he has done. When the two attempt to have sex, Eva begins to cry and Steven lays beside her. He stops and they hold each other looking in to one another’s eyes.

Frye and Adrianna go through the stolen files and they find out that there is a war going on between the CIA and the DEA. The female reporter goes to tell her girlfriend that she needs to move back home until the case is over. Sonya hunts down her mother and gives her money to get out of town and Marco meets an old friend to verify where Fausto is hiding.

The Bridge: Beholder ends with Eleanor Nacht being released from custody by the CIA rep and Marco, along with his two Marine escorts, find where Galvan is holed up. The two men are killed and Ruiz is left alone. The end of the season is marching closer, just two more episodes are left and things appear to be coming to a head. This last episode had Adam Arkin (son of Alan) in a cameo as the “well meaning” DEA agent. Arkin also directed the show, something that he seems to specialize in. After seeing the preview of next week’s episode, Ruiz may not have long to live now that he has finally caught up to Fausto.