The Lottery: Season One Finale Airing to a Disinterested Audience 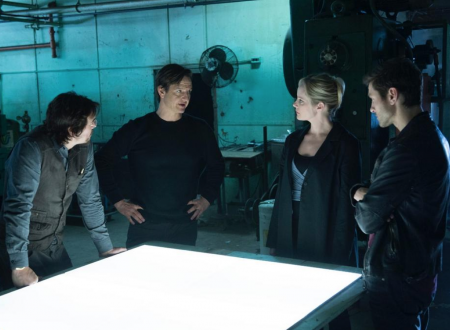 With the season one finale of The Lottery airing tonight to a disinterested audience, two things are clear. Firstly, there will most likely never be a season two and secondly if there was, for some reason, no one would care. The show has worked very hard to come up with a thriller that should have been a winner. Sadly, it seems that the viewing audience just do not have any interest in a near future where infertility and governmental dirty tricks walk hand in hand.

Whether the problem is that Marley Shelton is not a big enough “name” to attach to the show or if the plot is just too far outside the realm of most people’s reality is not known. Certainly the actress is talented enough to carry the series although she has not had nearly enough screen time to say that she truly headlines the show. It could also be that except for Shelton and the lesser known Michael Graziadei most of the cast are better known north of the border in Canada than in the U.S.

The plot is not too farfetched if one can get away from the world wide fertility problem. The premise that the government was working on a population control weapon developed by a scientist who was trying to keep a lid on research meant to limit the amount of people being introduced into an overcrowded world is not too “out there.” The idea that this government weapon got out of control resulting in no one being able to reproduce naturally or otherwise also does not take too much imagination to follow.

However, now that the season one finale of The Lottery will be airing to a disinterested audience tonight on Lifetime at 10 p.m. PST, it appears that the entire premise of the show is beyond most of the potential viewers imaginations. Perhaps a world that is getting ever more crowded daily, even hourly, has trouble swallowing the idea that one day all women will be so desperate to have children that they would join a government run lottery to carry a stranger’s child.

Never mind that there are women in this reality that are desperate to have children, poor potential mothers who go through the humiliation of being tested and retested for fertility. Not to mention resorting to help from the medical community to increase their chances of getting in a family way. Of course there are more women who can get pregnant than not but what about the idea that the government would, or could, step in and doom the entire world’s population to extinction because they can?

People in this day and age live in a world where governmental control increases every single day. Drones that spy on the public, phone taps in the name of national security, police being given bigger and better weapons in order to better control the local populace under their jurisdiction and a push to get stiffer gun laws in place all signal a disturbing trend. As pointed out before in the Guardian Liberty Voice, perhaps the plot of this show, ignoring the baby lottery bit, is too realistic with its devious and controlling government.

The season one finale of The Lottery airs tonight to a disinterested public audience. This means that in all likelihood that the end of one of the scariest shows on television will never be told. The small amount of fans will never learn if Kyle will get son Elvis back and whether or not Dr. Alison Lennon will survive her battle for the truth. This is a shame, as at least one fan wanted to see what was going to happen next, and the surprise that the “big bad” Darius Hayes actually loves his daughter enough to murder his cohort in crime to ensure her safety left things wide open for his character arc. Oh well, there is always reality TV for those with lesser imagination which networks would rather produce anyway.

12 Responses to "The Lottery: Season One Finale Airing to a Disinterested Audience"